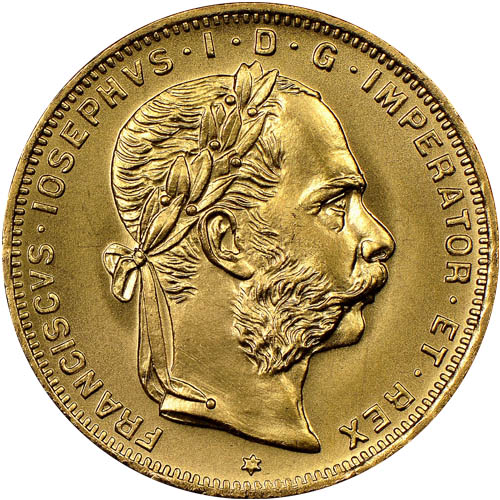 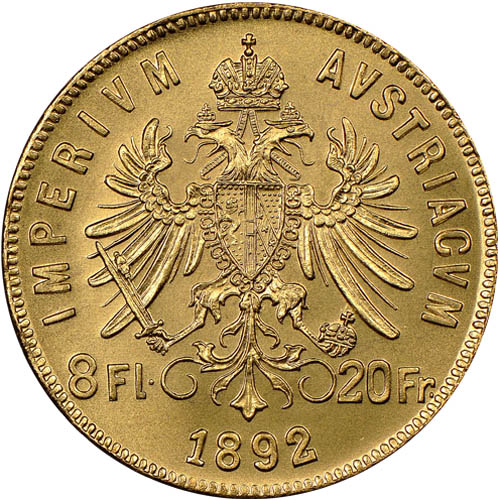 The Austro-Hungarian Empire was formed in 1867 and would eventually adopt the gold standard in 1892. Austrian Gold Coins are famously still available in the 21st century despite the fact that the earliest versions were issued in the 1850s by the Austrian Empire. One unique specimen of Austrian gold is the 1892 dual denomination gold restrike. Right now, 1892 20 Francs/8 Florin Austrian Gold Coin is available to purchase online from JM Bullion.

Each of these 1892 20 Francs/8 Florin Austrian Gold Coins is available to you in Average Circulated condition with protective packaging to ensure the continued quality of the condition. A coin in this condition shows typical signs of wear and tear for its age. The type and number of flaws are relatively limited in number and severity. Examples include minor scuffs, worn design features, and possible contact marks.

In 1892, the Austrian Mint struck these gold coins as a commemorative release. 20 Francs gold coins were popularly used throughout Europe at the time and the Austro-Hungarian Empire had first issued gold coins in this denomination in 1870. What makes these particular coins unique is the dual denomination they hold with a value of 20 Francs and 8 Florin.

The reverse of the 1892 20 Francs/8 Florin Austrian Gold Coin includes the crowned arms of the Austro-Hungarian Empire. The empire was forged out of lands controlled directly by the House of Hapsburg and included Hungary following his ascension to the Hungarian throne in 1867. The crowned arms features a double-headed eagle and engravings of the ceremonial date mark and both denominations issued to the coin.

On the obverse of 189 Austrian Gold Coins is the right-profile portrait of Emperor Franz Joseph I. He reigned predominantly as the Emperor of Austria and King of Hungary from December 1848 until his death in November 1916, making him the third-longest-reigning monarch of any European country. His portrait here depicts him with a wreath crown and his name and title in Latin around the design edge.

The Austrian Mint was founded by Duke Leopold V in 1194. He had imprisoned English King Richard I and his forces on their return from the crusades, and the 15 tonnes of silver Richard paid to Leopold was used in part to found the Austrian Mint.

Nicolas from AZ - April 02, 2020
"I received this coin today and it was very well packed. I was surprised to discover a coin in BU state, probably even worth grading down the road."