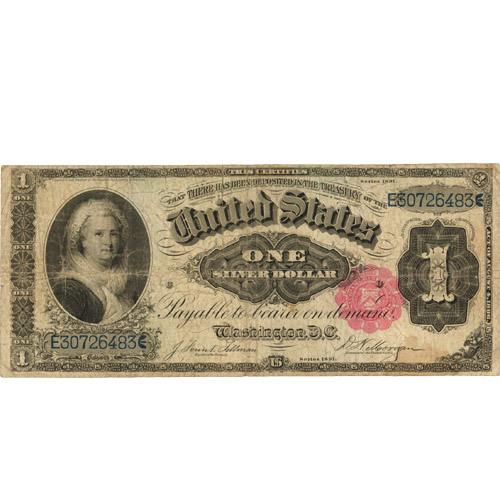 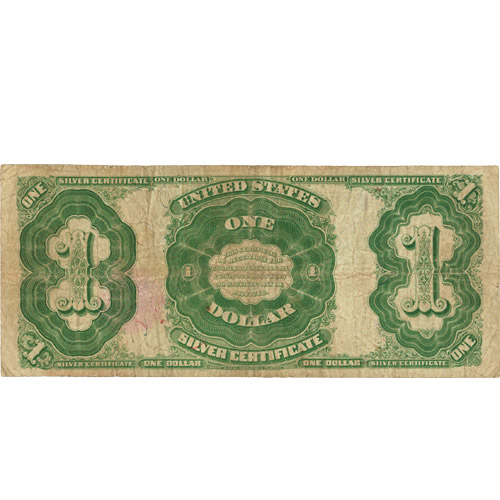 Historic US paper money looks much different than the notes in circulation today in the Federal Reserve Note Series. Americans today are accustomed to the portraits of former US Presidents and other important dignitaries from the decades around the founding of the nation. When the first major forms of paper currency were printed in the United States, the designs were much more ornate and featured a dizzying array of popular Americans. Today, 1891 $1 Silver Certificate Notes are available to you online from JM Bullion.

All of the 1891 $1 Silver Certificate Notes available through this JM Bullion listing come with a protective plastic currency sleeve. The notes arrive in Fine, or slightly better, condition. Notes in this condition showcase considerable signs of use that typically consist of rounded corners, margin splits, and wear from handling. Despite its handling and age, the paper in the note remains solid.

On the obverse side of 1891 $1 Silver Certificate Notes is the second iteration of the Martha Washington portrait. The first woman to hold the position of First Lady of the United States, Martha Washington debuted on the $1 Silver Certificate when it was introduced in 1886. She remained on the notes through this Series of 1891 redesign and the Series of 1896 Educational design collection, though her effigy was moved to the reverse on the latter note.

The reverse face of 1891 $1 Silver Certificate Notes comes with notations of the nation of issue, the series name, and the denomination of the note. The Series of 1891 Silver Certificates a small, scalloped US Treasury seal printed in red ink. There are two possible signature combinations for this series representing the Register of the Treasury and Treasurer of the United States.