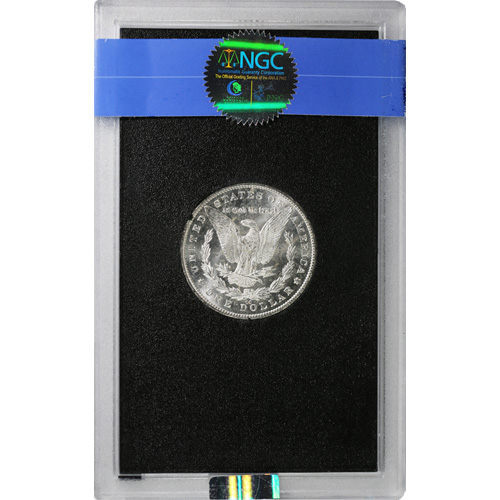 If you have an appreciation for the American Old West, then the Carson City Morgan dollars will be quite appealing. Coins minted at the historic Carson City Mint have a certain mystique and allure about them, in part because they are made from silver mined directly at the historic Comstock Lode. Today, 1881-CC Morgan Silver Dollar Coins in certified condition are available to you online at JM Bullion.

When you order 1881-CC Morgan Dollar Coins from JM Bullion in this online listing, they will arrive to you housed inside original GSA cases. When these coins were sent to the Numismatic Guaranty Corporation for grading, NGC certified them while also keeping them inside the original containers. The grading details can be found on a strip along the lower portion of the case.

Lady Liberty is depicted on the obverse of 1881-CC Morgan Silver Dollars. Here she is shown in left profile relief wearing a crown of wheat and cotton as well as a Phrygian cap. These caps were once worn by free slaves and have become popular symbols within the United States. Also on the obverse are inscriptions reading 1881, E Pluribus Unum.

The American heraldic eagle is found on the reverse face of Morgan Silver Dollar Coins. In this design, we see the eagle with its head turned to the left as it clutches several arrows and an olive branch in its talons. There are also inscriptions along the rim that read United States of America, One Dollar, In God We Trust. The Carson City mintmark is located on the reverse as well.

1881 is a desirable year for the Carson City Morgan, as only 296,000 were ever minted. By comparison, Philadelphia minted 9,163,000, New Orleans 5,708,000, and San Francisco 12,760,000. These particular Carson City Morgan Dollars have extra special appeal for collectors because they were included in the GSA hoard. This consisted of almost 3 million Morgan Silver Dollars found in Treasury vaults in the 1960s and later sold off to the public through seven highly publicized auctions.