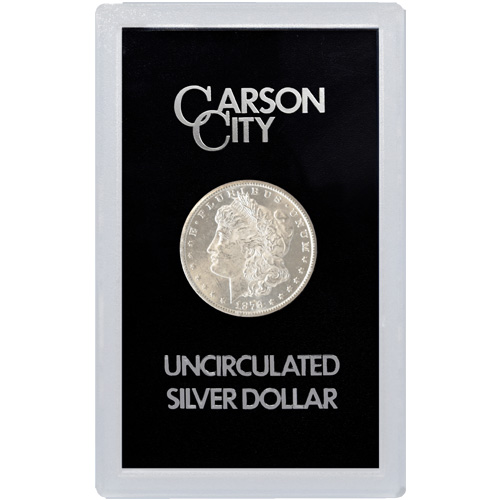 Carson City Mint Morgan Dollars were issued from 1878 to 1885 and 1889 to 1893. Though Carson City averaged an annual mintage between 250,000 and 1.3 million Morgan Dollars, many of the coins never reached circulation. In the 1960s, the US Treasury discovered some $3 million worth of Morgan Silver Dollars from the Carson City Mint that had still never been released into circulation. The Government Services Administration, or GSA, later released these coins in a controlled auction to the public in the 1970s and early 1980s.

Lady Liberty is depicted in left-profile relief on the obverse side of 1878-CC Morgan Dollars. This bust of Liberty was created by George T. Morgan for the relaunch of the US silver dollar after its previous cancellation in 1873.

A version of the heraldic eagle is found in the reverse field of 1878-CC Morgan Silver Dollars. The design features a bald eagle in front-facing relief with the arrows of war and the olive branch of peace in its talons. There is no US national shield in the Morgan Dollar design.

The 1878-CC Morgan Silver Dollars available in this product listing come with the original inner packaging from the GSA. Each silver dollar is housed in hard plastic with a blue card behind indicating the coins are Carson City issues and uncirculated.

JM Bullion customer service is available to assist you at 800-276-6508. Alternatively, you can contact us online through our live chat and email address features.