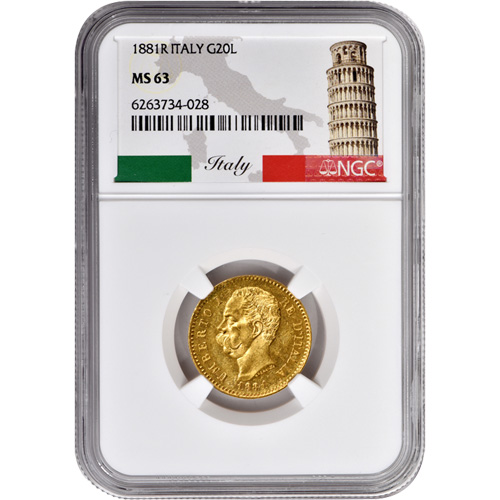 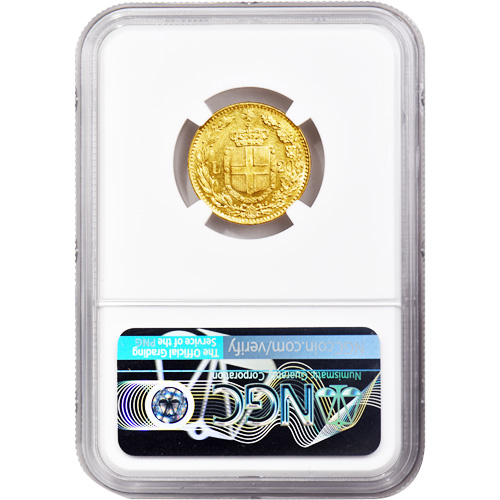 The gold coins of the Italian lira were some of the most heavily used coins in Europe during the late 19th and early 20th centuries. Produced by the Kingdom of Italy starting in 1861, the most popular denominations in the series were the 10 and 20 lire coins. Right now, certified 1862/1881 20 Lire Italian Gold Coins are available to purchase online from JM Bullion.

Each 1862/1881 20 Lire Italian Gold Coin offered here comes with an NGC certification and a plastic slab to protect the coin. The coins slab includes a custom label that features the strips of the Italian national flag and an image of the Leaning Tower of Pisa. Coins with a Mint State 63 certification exhibit mint luster that is likely to be slightly impaired. Potential flaws include numerous small contact marks, possible heavy marks, small hairlines visible with the naked eye, and even detracting scuff marks.

Please note that in this listing, you will receive either an 1862 or 1881-dated coin. We cannot guarantee which one you will receive in advance. Both coins have the same slab, label, and grade, regardless of date.

The coins of the Italia lira gold series were issued from the founding of the Kingdom of Italy in 1861 until roughly 1927. The coins were one of the few gold specimens from a European nation still struck and issued after World War I.

On the reverse of 20 Lire Italian Gold Coins, you will find the coat of arms for the Kingdom. The Italian seal of the monarchy era includes a quartered shield with an imperial crown at the top and a wreath flanking its sides.

If you have any questions, please contact JM Bullion. Our team is available to you at 800-276-6508, online using our live chat, and via our email address.