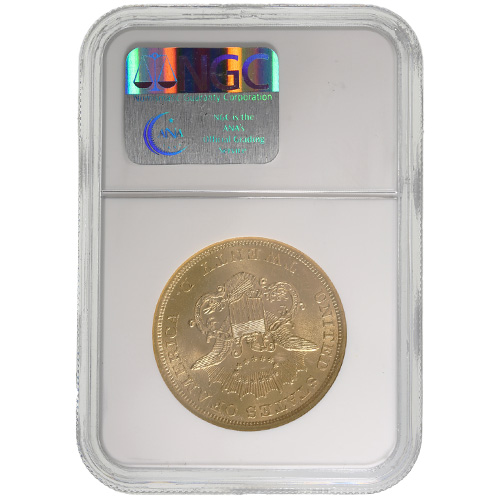 These coins were struck by the United States Mint in 1861, but never entered wider circulation. In the lead up to the Civil War, Americans began hoarding gold coins as they viewed paper money with uncertainty as war loomed on the horizon. These particular 1861 Liberty Gold Double Eagles never found their way into circulation after the war because they sank along with $400,000 worth of gold coins on the SS Republic in 1861.

Recovered by the shipwreck in 2003, these 1861 Pre-33 $20 Liberty Gold Double Eagle SS Republic Coins have a Mint State 62 certification from the NGC. Coins in this condition have impaired or dull luster, clusters of small marks, and noticeable hairlines.

On the obverse of 1861 $20 Liberty Gold Double Eagle Coins is the first design, first subtype in the series. Introduced in 1849 by James B. Longacre, fourth Chief Engraver of the United States Mint, this design is known as the Liberty head coronet. She is featured in left-profile relief with a crown on her head that reads “Liberty.” 13 stars surround her bust, with the date mark at the bottom.

The reverse of 1861 Pre-33 $20 Liberty Gold Double Eagles features a design based on the Great Seal of the United States of America. Similar to the heraldic eagle, this features a bald eagle behind the national shield clutching arrows in one talon and an olive branch in the other. A major difference here though is the use of sunburst rays behind the eagle’s head.

Please don’t hesitate to reach out to JM Bullion with your questions about gold coins for sale. You can call us at 800-276-6508, chat with us live online, or simply email us.