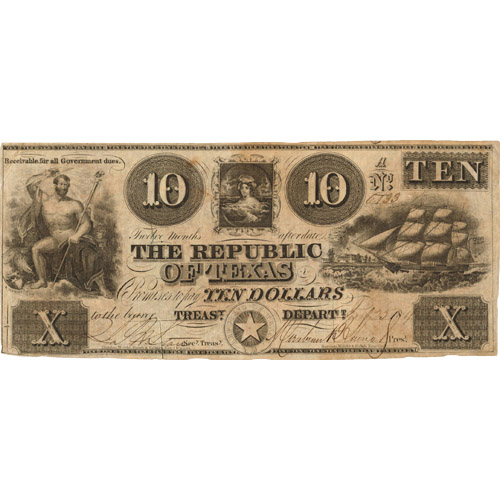 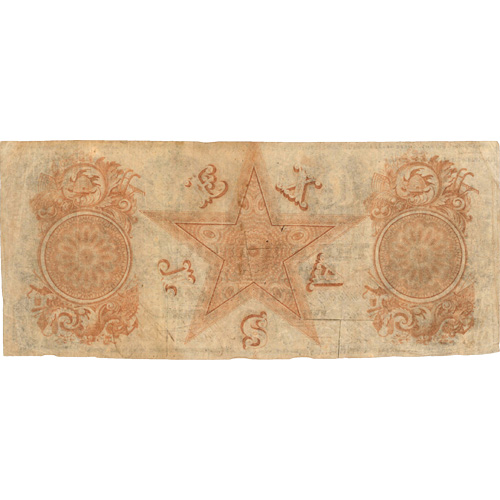 Prior to its annexation by the United States and admission into the Union, the Republic of Texas existed as a sovereign state for a decade. Founded in 1836, the Republic of Texas began to issue its own currency as early as 1837. The most notable form of Texas-issued currency launched in 1839 and was known as the redback. The notes had ornate designs on the obverse with the De Zavala star on the reverse. Today, 1839-1841 $10 Republic of Texas Notes are available to you in Fine-plus condition online from JM Bullion.

Throughout its history, the Republic of Texas was plagued by monetary issues. Although the Constitution of the Republic of Texas allowed for the coining of money, no gold or silver coins were ever issued by or for the Republic. In 1837, the first paper notes were issued by the government. Under the administration of President Mirabeau B. Lamar, the most notable form of Texas currency was released. Fondly known as redbacks, the notes were printed from 1839 to 1841 and had lost all monetary value by 1842.

All of the 1839-1841 $10 Republic of Texas Notes in this listing come to you with a plastic currency sleeve. Each note is in Fine+ condition, indicating common signs of extensive circulation such as rounded corners, margin splits, and folds. Republic of Texas Notes are unique in that each one was cut-canceled upon redemption in order to avoid the notes being redeemed a second time. As such, you may receive a note with this cut mark. Please note that Fine+ is a general term for the condition of the notes and that each one you purchase may showcase varying degrees of acceptable wear for a Fine+ note.

On the obverse side of $10 Republic of Texas Notes, you will find an ornate design element. There are several design features on this side of the note, such as the popular vignette of a sailing vessel on the right that appeared on various denominations of Republic of Texas notes. The notes in this series from the Republic bear the signatures of the Treasury Secretary and the President of the Republic of Texas.

The reverse field of 1839-1841 $10 Republic of Texas Notes comes with an image of the Lone Star of Texas. Designed by Lorenzo De Zavala, this image is often referred to as the De Zavala Star. The five-pointed star has the letters TEXAS in between each point. The ink these designs were printed in was red, but over time the low quality of the ink faded and often showcased as more of a burnt orange color.