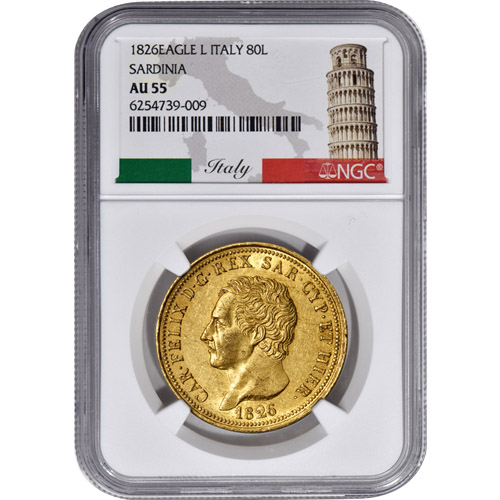 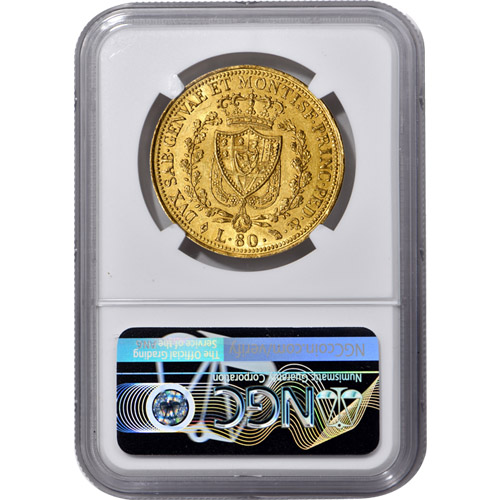 Please note that this listing contains coins graded AU50 or better. The image used in this product listing is for representation purposes only and is not a guarantee of the specific numeric grade for the coin you may receive.

The Kings of Sardinia would eventually bring the Sardinia lira to the unified Kingdom of Italy in 1861 as the Italian lira. Before this could happen, King Victor Emmanuel I of Sardinia introduced lira denominations in the form of 5 lire silver coins and 20 lire gold coins in 1816. The first expansion of lira denominations came in 1821 when Victor Emmanuel I produced an 80 lire coin just before he abdicated the throne. Today, 1826 80 Lire Italian Gold Sardinian Coins are available to you in certified condition from JM Bullion.

The coins of the Sardinian lira were introduced by King Victor Emmanuel I in 1816 and produced through 1861. The Sardinian lira is often referred to in the modern era as the Italian Gold Sardinian Coin because this denomination did not exactly disappear after 1861. Rather, it was brought to the unified Kingdom of Italy that formed in 1861 as King Victor Emmanuel II of Sardinia was the man to unify the kingdoms of Italy into one kingdom.

All of these 1826 80 Lire Italian Gold Sardinian Coins are available to you with an NGC certification. The coins are in About Uncirculated 50, or better, condition. Coins in this condition typically have wear and tear that ranges from light to only trace friction on the highest points of the design relief. You may notice to medium to near-full luster.

Please contact JM Bullion with questions about these gold coins for sale. Our team is available at 800-276-6508, online using our live chat, and via our email address.