Prior to 1840, the postage system in the United Kingdom required individuals receiving letters or other parcels to pay for the items upon receipt. The charges varied based on the number of sheets in a letter, the size of a parcel, and the distance those items had to travel to get from sender to receiver. The United Kingdom revolutionized its postage system in a manner that still reverberates today in modern public postal systems by introducing the Penny Black in 1840. In honor of the 180th anniversary of the debut of the first-ever adhesive postage stamp, Pobjoy Mint has a commemorative 5 oz silver coin available for collectors. 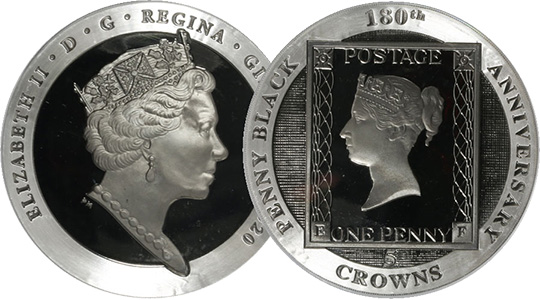 The reverse design element of the 2020 5 oz Proof British Penny Black Silver Coin recreates the design created in 1840 when the United Kingdom introduced the Penny Black. The center of the design element offers an exact depiction of the postage stamp the mint introduced. Offered up precisely as it appeared on the 1840 stamps, the design includes “Postage” “One Penny” on the stamp shape with a left-profile bust of Queen Victoria wearing the George IV State Diadem Crown on her head. Inscriptions on this face of the coin include the name of the stamp, a notation of the anniversary year, and the value of the coin as assigned by the Pobjoy Mint, “5 Crowns.”

On the obverse face of the 2020 Proof British Penny Black Silver Coins, you will find a right-profile bust of Queen Elizabeth II. This portrait of Elizabeth II is exclusive to the Pobjoy Mint and its coinage for Commonwealth nations. The right-profile bust of the Queen depicts her wearing the same George IV State Diadem Crown as her great-grandmother, Queen Victoria, in the reverse depiction of the Penny Black stamp. The Queen’s effigy is accompanied by inscriptions around the design rim that include the nation of issue, the Queen’s name, and the date of issue.

The Pobjoy Mint offers these coins individually with a black presentation case from the mint and a Certificate of Authenticity. The COA includes the name of the stamp and a recreation of the stamp’s imagery in its original black-and-white appearance.

History of the Penny Black

The history of the Penny Black stamp goes back three years before its introduction in 1840. In 1837, with British postal rates high and seemingly random in application, Sir Rowland Hill suggested the government look into forming a new payment system for its public postal service. After a two-year inquiry, it was decided that pre-paid stamps were an ideal alternative to the existing system that charged recipients of mail based on the weight of letters or parcels and the distance traveled to complete the delivery. A left-profile portrait of then-Princess Victoria was created and chosen to grace the stamp. By the time the Penny Black went into use in May 1840, she had ascended to the throne as Queen Victoria.

The introduction of the Penny Black revolutionized, and simplified, the public postal system in the United Kingdom. Now, senders could purchase the pre-paid Penny Black stamp to place on letters of up to 14 Grams of weight. This meant that letters could now be mailed for a flat rate of one penny no matter the distance to be traveled.

The Pobjoy Mint has previously issued commemorative coins honoring the debut of the Penny Black in 1840, including 170th and 175th-anniversary issues. With another milestone here, a new coin is available. You can get the 2020 5 oz Proof Penny Black Coin online from JM Bullion. If you have questions for us, please don’t hesitate to call us at 800-276-6508, chat with us live online, or simply send us an email. Don’t forget you can catch our blog posts each week for more details on upcoming coin releases and follow us on Facebook for daily updates and spot price contests.