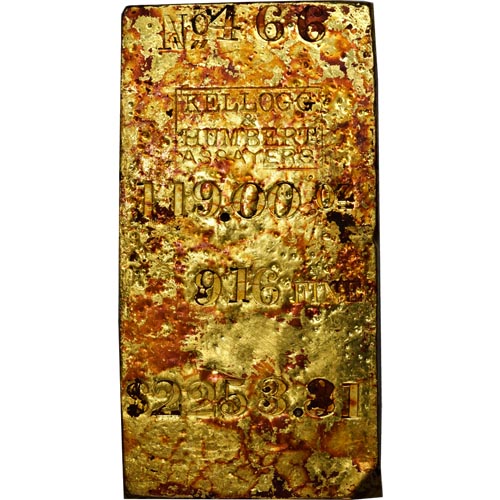 The SS Central America is the most famous ship of gold in American history. In the decade after the California Gold Rush started, steamer ships were contracted to move gold bullion ingots from refiners and assayers on the West Coast via the isthmus of Panama to the Gulf of Mexico for transport up the Eastern Seaboard to New York. The SS Central America was following this well-known route when tragedy struck in September 1857. In the 1980s, the ship was discovered on the floor of the Atlantic Ocean and its long-lost treasures were eventually salvaged. Now, you can own one of those original gold bars with the 119 oz SS Central America Kellogg & Humbert Assayers Gold Bar courtesy of JM Bullion.

The SS Central America was the second ship to move these gold bars on their journey from California to New York. The bars were originally shipped from San Francisco down the California coast to the isthmus of Panama aboard the SS Sonora. When the Senora reached Panama, the gold coins and bars inside were transported via rail across the isthmus to the port of Colon.

These 119 oz SS Central America Kellogg & Humbert Assayers Gold Bars are available to purchase with protective packaging. The bars are sealed inside of hard-plastic holders and secured inside of a Pelican case for transportation and storage.

JM Bullion is happy to field your questions about this impressive bar. You can call us at 800-276-6508, chat with us live online, or email us directly.