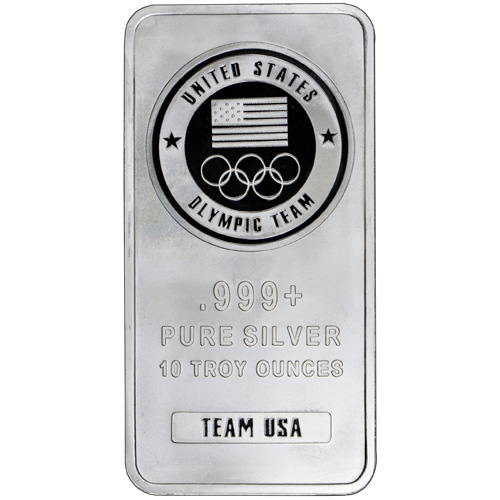 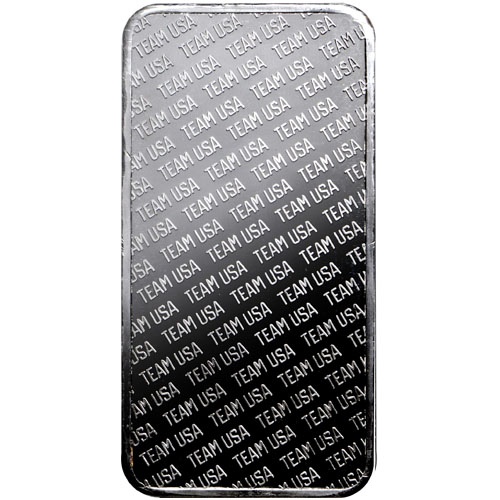 The very first Olympic Games were held throughout Ancient Greece. The very first games were held in Olympia, Greece and originally served as a festival or celebration in honor of the god Zeus. Events such as a footrace, javelin toss, and wrestling were later added to the festivities. These original games are widely considered to have originated around 776 BC.

Fast forward a few thousand years, and the first modern Olympic Games were launched in 1896 to bring together the nations of the world in the spirit of competition not dissimilar to those Ancient Greek games. The United States may not have existed during ancient times, but US athletes were there when the first modern games took place in Athens, Greece in 1896.

Each 10 oz US Olympic Team Silver Bar offered in this listing celebrates the history of Team USA. The bars are available for purchase inside of individually heat-sealed packages, or monster boxes that contain a total of 50 bars for a total of 500 Troy ounces of .999 pure silver.

On the obverse of each of the US Olympic Team Silver Bars available here today is the United States Olympic Committee symbol. Contained within a circle at the top of the bar, the engravings are featured horizontally down the obverse with the emblem at the top. It includes the American flag above the five interlocking rings that serve as the Olympic Games emblem. Around that you’ll find the engraving of “United States Olympic Team.

Other engravings on this face of the bar include the purity, metal content, and weight of the bar. There is a box field at the bottom of the bar with an engraving of “Team USA” inside. Flip the bar to its reverse and you’ll find the repeating image of the phrase “Team USA.”

If you have any questions about these silver bars for sale, please don’t hesitate to ask. JM Bullion customer service is available to you at 800-276-6508, online using our live chat, and via our email address.

James from - August 19, 2020
"Very beautiful design, great detail. I would buy another if they come back in stock. I am an Olympic fan. "

Anthony from FL - June 09, 2018
"A very unique bar of silver, with the Olympic Logo for Team USA. My son is a big sports enthusiast. This bar is going in his silver collection."