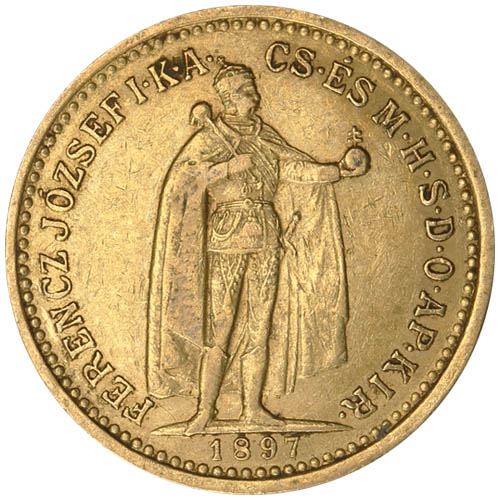 Before Queen Elizabeth II began her reign as Queen of England, Franz Joseph I of Austria vaulted into the history books as one of the longest-reigning monarchs on the European continent. The Emperor of Austria and King of Hungary, Joseph I enjoyed the third-longest reign in Europe behind Louis XIV of France and Johann II of Liechtenstein. Today, 10 Korona Gold Coins with his likeness on them are available to purchase from JM Bullion.

Franz Joseph I was born in 1830 and quickly rose to power at the tender age of 18. On December 2, 1848, this 18-year-old man was crowned the Emperor of Austria and the King of Hungary. He would go on to hold this title until his death in 1916 as the Empire fought for its very existence as a member of the Central Powers during World War I.

All 10 Korona Gold Coins in this listing are available to you in Almost Uncirculated condition and ship inside of protective packaging. Coins in AU condition show only slight signs of wear and tear on the designs elements and surfaces. This wear and tear is usually limited to the highest reliefs of the design or the edges of the coin itself.

10 Korona Gold Coins were issued from 1892 to 1915 in the Kingdom of Hungary. The Austro-Hungarian Empire maintained common coinage, but the Corona/Korona currency was issued separately by mints in Austria and Hungary.

On the obverse of 10 Korona Gold Coins, you’ll find the standing portrait of Franz Joseph I. While Austrian coinage during the period of the empire featured a bust of his head alone, these Hungarian coins depicted the full-length figure of Joseph in right-profile relief. He wears the crown of the King of Hungary on his head, wields a scepter in his right hand, and holds out a crowned globe in his left.

The reverse of the coins features the crowned arms of the Austro-Hungarian Empire. In this particular design, the crowned arms are supported by angelic figures on either side. Engravings on the coins are in the Hungarian tongue with a legend on the obverse also written in Latin.

Please feel free to reach out to JM Bullion with your questions. You can call our customer service team at 800-276-6508, chat with us live online, or simply send us an email with your inquiries. If you’re looking for the latest price of gold per ounce, you’ll find it on our website at all times!