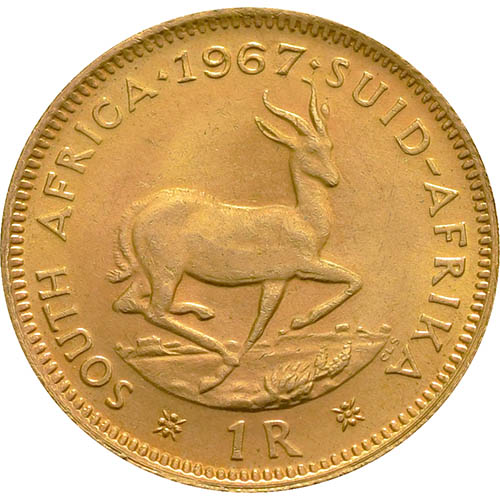 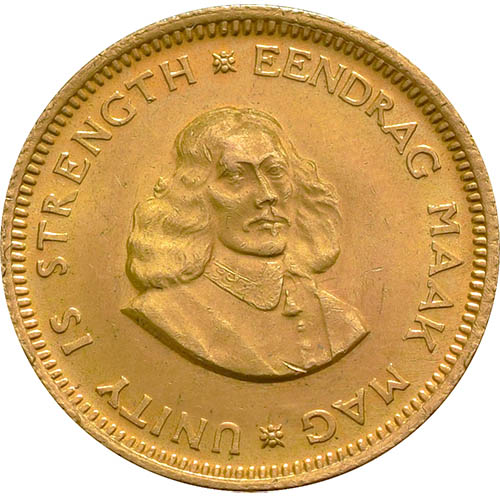 Each 1 Rand South African Gold Coin listed here is in AU condition. Known as About Uncirculated, these coins have only very slight signs of wear and tear, often landing on the Sheldon scale of grading between the numerical figures of 50 and 58.

South Africa had a long path to independent control over its lands. The first step came on December 11, 1931 when the nation earned self-governance over its people. Until 1960, the nation issued coins in Pound Sterling denominations due to its association for decades with the United Kingdom.

In 1961 the nation gained full independence from British control when the Republic of South Africa was formed on May 31, 1961. Almost immediately the South African Mint moved to replace Pound Sterling denominations in circulation by issuing gold coins in 1 Rand and 2 Rand denominations.

These 1 Rand South African Gold Coins were the first sovereign coinage of the Republic of South Africa. Issued from 1961 to 1983, they predate the Gold Krugerrand and though they maintain legal tender status today, few are ever used for economic transactions because they are so highly coveted by collectors.

On the obverse of the 1 Rand South African Gold Coin you’ll find a bust of Jan van Riebeck. Born Johan Anthoniszoon van Riebeeck in 1619, he volunteered to take command of the initial Dutch efforts at settlement in South Africa. He landed with three ships on the site of modern-day Cape Town in 1652, founding the city that today is the second-most populous in South Africa and capital of the Western Cape province.

The reverse of these 1 Rand South African Gold Coins features the image of a Springbok antelope, a figure which was later adopted for use on the Gold Krugerrand coinage. It includes engravings of the face value, year of issue, and the name South Africa in both English and Afrikaans.

All Rand South African Gold Coins are produced by the South African Mint, which strikes circulation and bullion coinage for the nation from its Pretoria facility.

If you have questions about buying gold, please contact JM Bullion. We’ve available at 800-276-6508, online using our live chat, and via email.