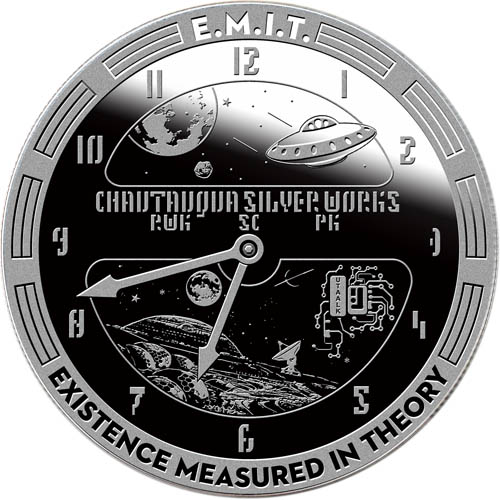 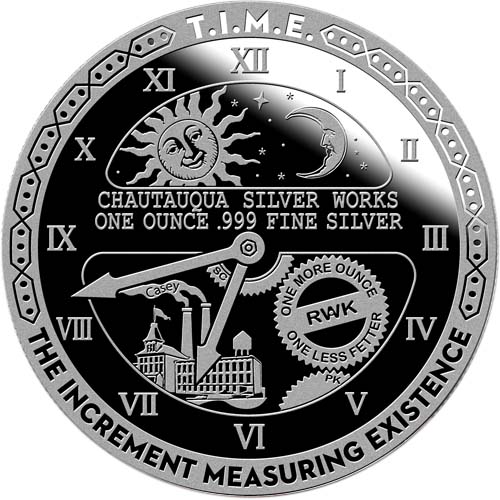 The T.I.M.E. Series from North American Mint and Chautauqua Silver Works concludes with its fifth design, and for this final offering the producers have broken with production history to use the obverse design twice in a double obverse striking of the coin. The 1 oz TIME EMIT Silver Round is now available to you for purchase online from JM Bullion.

The word time is what is known as a palindrome. A palindrome is a word, phrase, or sequence that reads exactly the same backward as it does forward. For the final release of the T.I.M.E. Series you get the TIME EMIT silver round, which pays homage to the status of the word as a palindrome.

On one side of this double-obverse striking, youll find the image of clock gears and the hands of time moving around a clock face that has each hour marked with Roman numerals. Background imagery in the design includes that of a sun and moon in the upper quadrant, while a factory and gears are in the bottom. Engravings on this side include The Increment Measuring Existence, as well as the silver works name, purity, metal content, and weight of the round.

Flip it over and youll find a similar, yet slightly altered design. Instead of Roman numerals, the hour marks are denoted using standard English-language numbering. The hands of time are featured, along with a depiction of the planet Earth and spacecraft speeding away in the upper quadrant, while the bottom features a different view of the celestial body we call home. Engravings on this side include Existence Measured in Theory at the bottom, with EMIT at the top.

All 1 oz TIME EMIT Silver Rounds from the T.I.M.E. Series ship inside of an AirTite plastic capsule for protection, which itself is kept within a pouch for added protection during shipping. These rounds do not include COAs, but do have edge lettering denoting their production number.

Additionally, each silver round has proof-like finish. This gives the rounds some of the visual characteristics common to proof coinage, such as frosted finishes on the design features and mirrored background fields.

Chautauqua Silver Works was founded in Western New York by Ron Kinney. These silver rounds are released in cooperation with the North American Mint, which has 29 years of dedicated service and quality as a private facility in the industry.

We encourage you to contact JM Bullion at 800-276-6508 with questions. You can also reach us online using our live chat and email features.

Robert from NJ - August 09, 2019
"Very cool the way they broke away from traditional target ag47 logo.awesome collection . Thanks.JM Bullion is the way to go!"

John from FL - December 24, 2017
"One of the few rounds that is as impressive to look at in your hand as in the photos. precise detail. As nice as any proof."

RICHARD from SC - July 31, 2017
"Arrived quickly and as advertised. Beautiful proof finish and clear lettering and designs, very happy with it. It will go with the rest of that collection. As always JMB is my precious metal dealer !"