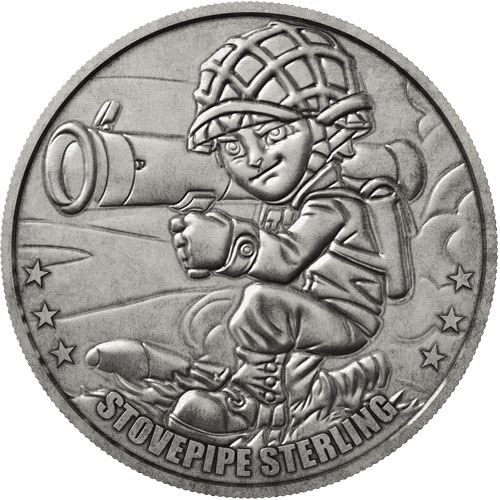 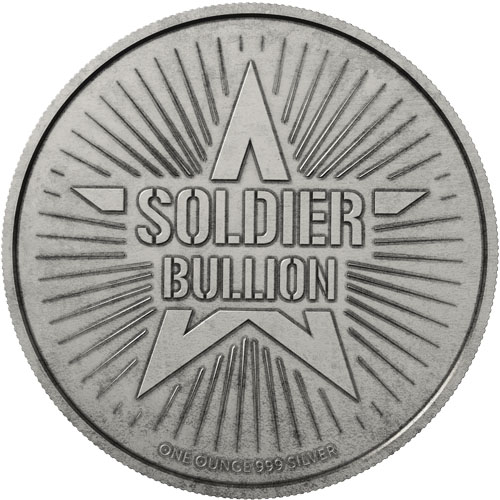 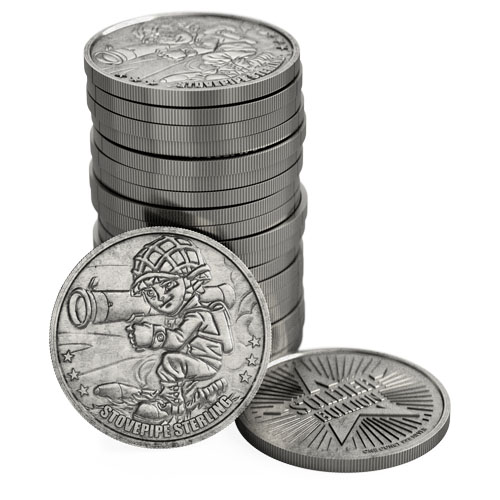 As low as $5.99 per round over spot!
Add to WishlistLog In to add this product to your Wishlist
Free Shipping on $199+ Orders

The toy soldiers of the 1940s that inspired a collection of Silver Soldiers Statues are now being reimagined on the reverse field of a new silver round series. The Soldier Bullion Series captures images of the many valiant World War II soldiers from America that preserved democracy with a victory of the Axis Powers. Right now, 1 oz Soldier Bullion Series Stovepipe Sterling Silver Rounds are available to purchase online from JM Bullion.

Each of the 1 oz Soldier Bullion Series Stovepipe Sterling Silver Rounds available to you for purchase today comes in brand-new condition. The rounds are housed in protective plastic flips or tubes of 20 as part of the all-new Soldier Bullion Series. The coins have a rough, weathered visual finish for a distinctive visual appeal.

Stovepipe Sterling is the great equalizer for foot soldiers on the mechanized battlefields of World War II. The first truly mobile war, battalions of foot soldiers needed a way to level the playing field against mechanized units. United States Military forces were given the M1 Bazooka as the primary equalizer.

The M1 Bazooka was developed as an anti-tank rocket launcher that could be quickly deployed in the field. Carried on the back of a soldier assigned to any given unit, it could be fired from a kneeling position resting on the shoulder of the individual soldier. The physical appearance of the M1 resulted in the name Bazooka as a result of its resemblance to a musical instrument of the same name that was popularized in the United States in the 1930s by the comedian Bob Burns.

The obverse of the 1 oz Soldier Bullion Series Stovepipe Sterling Silver Round features the common design element for the series. This design bears a large US star in the background field with lines representing its bright shine emanating from the center. The name of the series, “Soldier Bullion,” is inscribed across the center above the star.

On the reverse side of Soldier Bullion Series Stovepipe Sterling Silver Rounds is a depiction of the rocket launcher soldier in a fighting unit. When ground forces run into mechanized units, machine gun nests, or fortified bunkers, it is up to Stovepipe Sterling to bring his trusty M1 Bazooka to bear and launch a propelled projectile downrange to deliver its explosive round.

If you have any questions about the new silver rounds in this series, please contact JM Bullion. Our customer service team is available at 800-276-6508, online using our live chat, and via our email address.

Leon from - October 04, 2021
"Great looking round ! I thought that I waited to long last time it was available. Yea this time I purchased the Stovepipe round the day JM e-mailed it was back in stock . The round is very shiny "