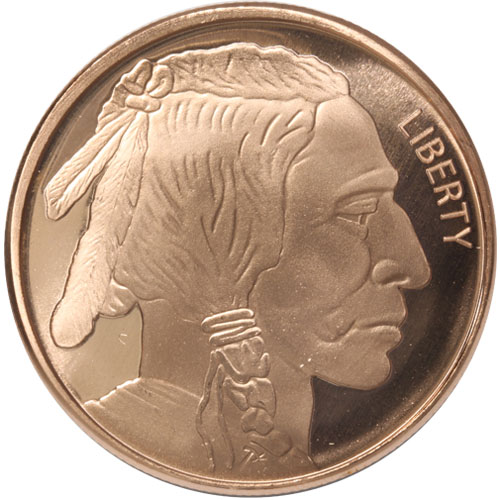 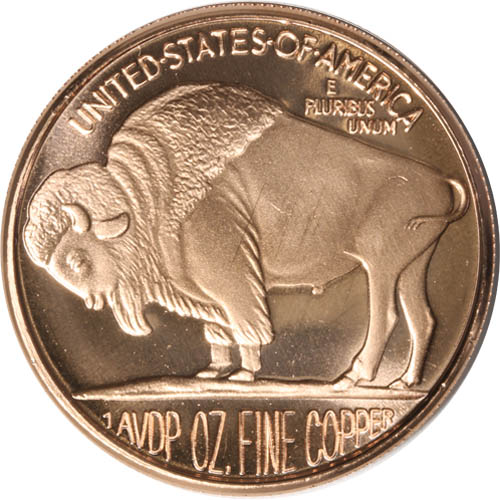 Long considered one of the most beautiful coin designs in American history, the Buffalo Nickel was the first major American denomination to feature a design with an indigenous figure. The Buffalo Nickel has been replicated on countless bullion specimens, including privately-issued copper rounds. Today, 1 oz SilverTowne Buffalo Copper Rounds are available to you online from JM Bullion.

The Buffalo Nickel coins were designed by James Earle Fraser in 1913. He was commissioned by the US Mint and Treasury Department in the early 1910s to create a new design for the US nickel. His five-cent piece design was approved by the Taft administration in 1913 for use on the nickel. It remained in production on the nickel until 1938 and was eventually replaced by the modern Jefferson bust on the coin.

All of the 1 oz SilverTowne Buffalo Copper Rounds in this product listing come to you in brand-new condition. The copper rounds from SilverTowne are packaged individually inside of plastic flips, in multiples of 16 rounds with a tube, and in multiples of 400 rounds in a box that contains 25 individual tubes.

A stoic Native American figure features on the obverse side of the 1 oz SilverTowne Buffalo Copper Round. Designed by Fraser, the indigenous figure is captured in right-profile relief with an inscription of Liberty off the nose of the portrait. At the bottom near the braid that runs down the right side of his face, you will notice the SilverTowne pick-ax mint mark.

The American bison is featured on the reverse of the SilverTowne Buffalo Copper Round. The largest land mammal in North America, the American bison was central to the culture and livelihood of indigenous tribes on the American Plains. The design featured here captures the bison in left-profile relief as it stands on a mound of dirt.

Frasers Buffalo Nickel design has been replicated on silver rounds and silver bars in recent years, but its most prominent modern use comes on the American Gold Buffalo bullion coins from the United States Mint.

SilverTowne is one of Americas most prominent private mints. Founded by Leon Hendrickson in 1949 as a small coin shop, the company has grown into an impressive private mint and authorized dealer.

Please feel free to contact JM Bullion with your questions. You can call us on the phone at 800-276-6508, chat with us live online, or email us directly.