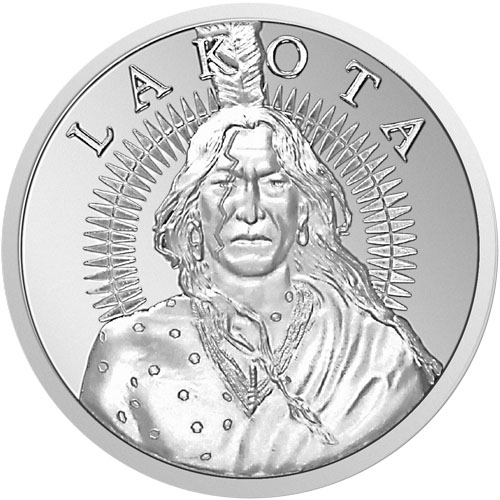 Crazy Horse is perhaps the best-known indigenous figure in American history. His accomplishments on the field of battle against the United States Army in the late 19th century earned him the respect of his people, as well as that of his enemies in the US Army and the federal government. His legacy and achievements are remembered with a new silver round issue. Now, 1 oz Lakota Crazy Horse Silver Rounds are available to you for purchase online from JM Bullion.

Crazy Horse lived a short life, but made a huge impact on 19th-century America. Born in 1840, he quickly rose in the ranks of his Oglala band of Lakota. As a young man, he took up arms against the United States in response to the continued encroachment of white settlers on indigenous lands in the American Plains.

The Lakota people, known to some as the Teton Sioux, represented one of the three member tribes of the Great Sioux Nation. Historically speaking, the Lakota ranged throughout North and South Dakota, as well as small portions of neighboring states like Nebraska, Minnesota, and Montana. Today, there are some 115,000 registered members of the tribe living in North Dakota and South Dakota.

On the obverse of the 1 oz Lakota Crazy Horse Silver Round is a front-facing bust of Crazy Horse. The front-facing relief captures a depiction of a peaceful Crazy Horse wearing his indigenous tribal clothes with a tribal symbol encircling his figure from behind. The name of his tribe is inscribed above the bust. Crazy Horse was an active fighter during the Black Hills War, including major roles in the Fetterman Fight and the Battle of Little Bighorn.

The reverse face of 1 oz Lakota Crazy Horse Silver Rounds includes the image of an American bison. No animal was more important, spiritually and economically, to the indigenous tribes of the American Plains than the bison. Known as the buffalo in America, the bison in this image is reminiscent of the design James Earle Fraser created for the United States Mint in 1913 to grace the US nickel. The bison is shown in left-profile relief standing on a mound of dirt.

These 1 oz Lakota Crazy Horse Silver Rounds are available to you in brand-new condition from the mint. Each one of the rounds is available with a protective plastic flip.

JM Bullion customer service is available to assist you with any questions on the phone at 800-276-6508. We are also available online through our live chat and email address features.