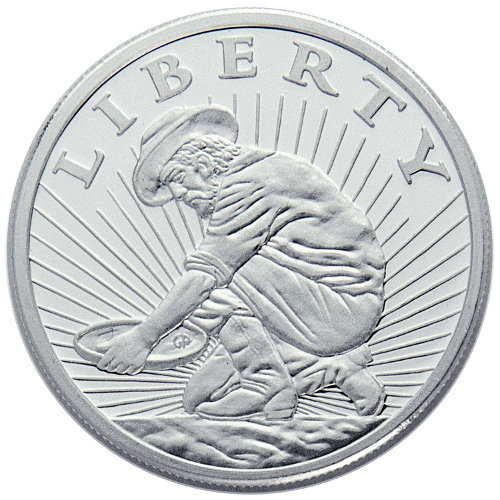 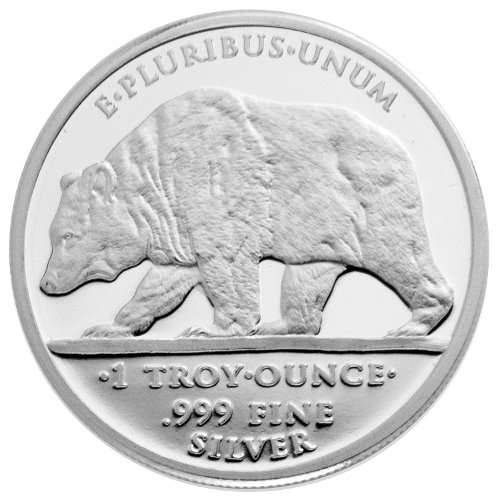 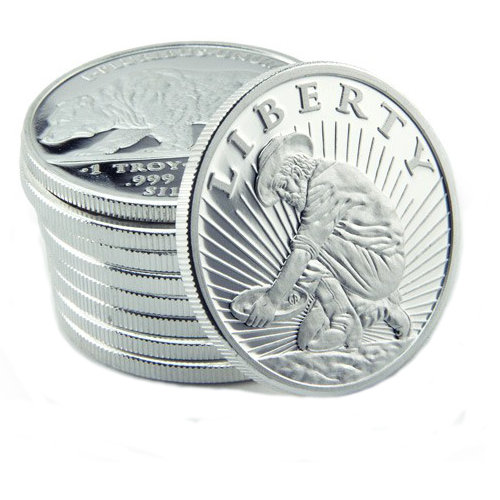 To celebrate the 75th Anniversary of Californias Statehood in 1925, the Great AmericanMint released a special commemorative coin known as the California Diamond Jubilee Half-dollar. Although 150,000 of these half-dollars were created, about 60,000 of them had to be melted, leaving only approximately 86,594 left in existence. Such limited mintage makes it among one of the most difficult pieces of currency to find. Fortunately, with this new Prospector Silver Replica Round, more collectors have the chance to enjoy an intimate look atthe rare California Diamond Jubilee Half-dollar.

Each prospector round has been produced from 1 troy ounce of .999 fine silver. All rounds are guaranteed to be in brand new proof-like condition, which means that only one side of the coin possesses a highly reflective surface. Please note that although this silver round has been modeled after a real coin, it has no face value and it cannot be used as actual currency.

As the name suggests, each prospector round features the eponymous character on its front side. He represents the famous 1849 gold rush, which was responsible for ushering California into statehood. Just as in the original design, the prospector is crouched over the rugged terrain and searching his mining pan for any signs of gold. Behind him, beam the bright rays of sunlight. The word Liberty has been inscribed over his head. The only exception to the artwork is the omission of Californias Diamond Jubilee and the year 1925.

On the reverse side is another symbol commonly associated with California; the grizzly bear. This creature would ultimately become the state mascot in 1953. From its plush fur to its massive girth, collectors and wildlife enthusiasts will appreciate the detailed rendering that was utilized to create such an accurate illustration. Above the great grizzly sits the phrase, E Pluribus Unum. Beneath its paws, the weight and purity of the round have replaced our nations name and coins denomination.

This 1 ounce Prospectors Silver Replica Round offers a charming rendition of the original half-dollar design and is certain to become a cherished collectible for generations to come. If you require any further information regarding this piece, please contact us at 800-276-6508. You may also use live chat or online forms.

Stacy from OH - May 26, 2015
"1st time buyer. i absolutely love these 1 oz prospector rounds. Very great detail you can even see the bears fur.Will def be getting lots more in the near future. i did lots of research trying to find the best prices being a new bullion buyer and JM Bullion has the best deals I've been able to find and free shipping which is outstanding. Thanks again JM!!!"

EMMETT M. from OH - October 11, 2014
"Recieved my 6 Prospector Rounds today and the way they were protected for shipment, Sealed in pairs from damage and for protectin were simlply Marvelous. And the Quality of the Rounds were Second to None."

Ronald from CA - October 03, 2014
"Beautiful round. Excellent tribute to the prospector themed Englehard, with a nicer finish. Proof-like."