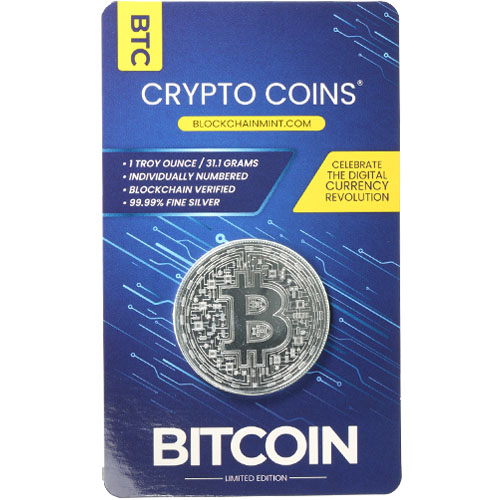 2019 marks the 10th anniversary of the release of Bitcoin. First issued in 2009, Bitcoin existed in the shadows for several years before widespread notoriety began shedding a light on crypto currency. Today, Bitcoin has the largest market cap and highest trading value of any form of crypto currency. Right now, 1 oz Proof Crypto Commemorative Bitcoin 10th Anniversary Silver Rounds from Hotco are available to purchase online at JM Bullion.

Each 1 oz Proof Crypto Commemorative Bitcoin 10th Anniversary Silver Round from Heads or Tales Coins and Collectibles features a protective plastic capsule. The individual rounds come with a numbered Certificate of Authenticity and this particular release is the proof version. A proof silver round features frosted design elements and mirrored background fields.

Satoshi Nakamoto, the rumored cryptologist behind Bitcoin, first presented the concept of a crypto currency that would become Bitcoin in a 2008 paper. The very first transaction using Bitcoin took place in 2009 when Satoshi Nakamoto transferred some of the crypto currency to Hal Finney, a US software engineer. The first public transaction involving Bitcoin was for two large Papa John’s pizzas later in that same year.

On the obverse side of 1 oz Proof Crypto Commemorative Bitcoin 10th Anniversary Silver Rounds is the image of the Bitcoin symbol. This simple design uses the letter “B” as a symbol with two vertical lines struck through it.

Bitcoin has experienced tremendous swings in value over the course of the last decade. As the leading crypto currency marks its 10th anniversary, it seems hard to imagine a time when its value was essentially nill. The first year of availability saw Bitcoin value sitting around $.001 (USD). In 2019 alone, Bitcoin’s value has swung from as high as $12,900 to values around $9,400.

The reverse face of the 1 oz Proof Crypto Commemorative Bitcoin 10th Anniversary Silver Round includes a networking-themed background design as a nod to the virtual existence of crypto currencies. There is a blank field within the design that has a date mark and the initials “MJB.” Because crypto currencies exist in virtual wallets, you can never hold a unit of Bitcoin in your hand. In 2011 though, MJB designed the first-ever Bitcoin “coin” to allow users a commemorative item to hold in their hands in place of the actual currency.