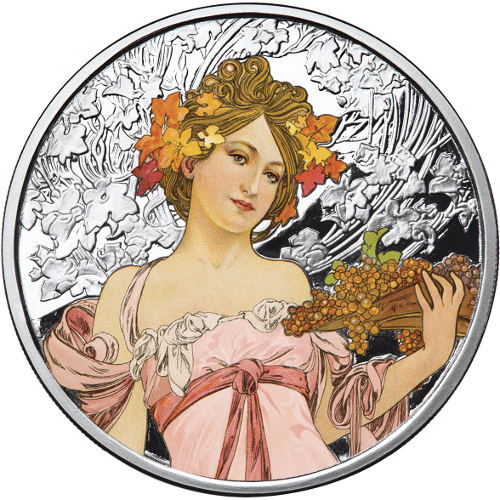 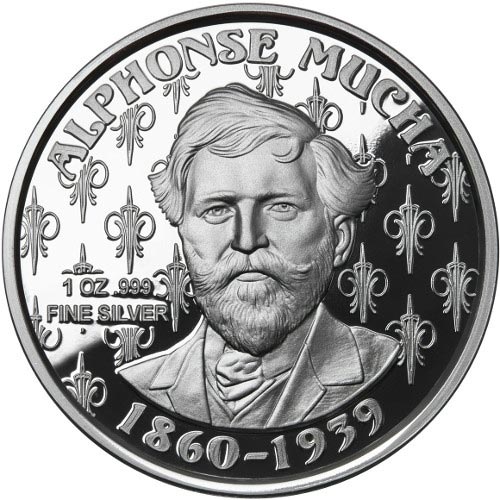 Alphonse Mucha is widely regarded as the father of the Art Nouveau movement. His career in the arts began in 1890, but the upward trajectory really took off in the period ranging from 1895 to 1910. He was an active artist until his death, launching a movement and changing the concept of art ownership in the process by making it accessible to the masses. The 1 oz Proof Colorized Mucha Collection Champagne Silver Round is available to you now from JM Bullion.

The image of Champagne was originally commissioned by F. Champenois and appeared on the Exposition dAffiches Artistiques Fracaises and Etrangeres in the city of Rheims, France, in November 1896. Following its debut, Champagne would go on to be used by numerous other clients of Mucha for ads and imagery, and was featured on a primary ad for the exposition with a glass of champagne in her hand.

Champagne would later to go on to greater fame as one of the Mucha Women because of her use in a champagne advertising campaign. Known as Champagne White Star, her figure graced the posters and catalogs of a prominent champagne company that Mucha worked with starting in 1899. She promoted a new line of lighter champagne.

The reverse of each of the Mucha Collection Silver Rounds includes a portrait of the artist himself. Mucha was born in present-day Czech Republic, then the Austrian Empire, in 1860 and would launch his artistic career in 1895 with an ad sketch for a local playhouse. He was active in the arts until his death in 1939.

On the obverse of all 1 oz Proof Colorized Mucha Collection Champagne Silver Rounds youll find the beautiful image of Champagne. Her figure was used by a prominent champagne company that Mucha worked for designing catalogs, posters, and other advertisements. She is depicted as a sensual blonde with a long, pink dresses that exposes her shoulders. Grape vines frame her figure in the background as she clutches a bowl of grapes in her left hand.

These Champagne Silver Rounds feature a beautiful proof striking with a mirrored finish to the background. The addition of colorized finishes to the round brings his original Champagne design to life. All rounds in the collection have edge lettering with individual serial numbers, which are reflected on the Certificate of Authenticity included in the purchase of every round.

We encourage JM Bullion customers to contact us with questions. Were available at 800-276-6508, online using our live chat, and via our email address.