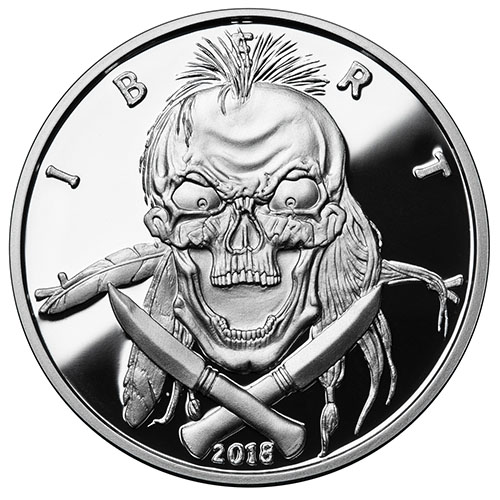 The fifth release of the American Western Skulls Collection is here and the design used on the Indian Brave design might be the most frightening yet among the series of silver rounds. Each round in this collection features a new obverse design of a character commonly associated with the Wild West era of American history. Right now, 1 oz Proof American Western Skulls Indian Brave Silver Rounds are available to purchase online from JM Bullion.

Each of the individual 1 oz Proof American Western Skulls Indian Brave Silver Rounds available to you today arrives as the fifth release of the six-round series. Individual rounds are housed within protective capsules and come with a numbered Certificate of Authenticity.

The 1 oz Proof Indian Brave Rounds have the same impressive proof elements of other issues in the series. The design elements of the Indian Brave have a matte, frosted finish that offsets the deeply-mirrored, clear background field. Each round has its own unique serial number stamped onto the edge of the round.

Concepts surrounding the Indian Brave in American culture have been distorted over nearly 200 years. The Brave is depicted as either a peaceful, stoic indigenous tribal member who kills only to eat or defend his family. Alternatively, a Brave is depicted as an extremely skilled warrior with a thirst for blood and the ability to succeed in any battle.

The obverse of the 1 oz Proof American Western Skulls Indian Brave Silver Round features the skull of a brave warrior with spiked hair atop its head, long hair down the back, and two feathers. His mouth is open wide as if he is unleashing a battle cry as he stares you down. Two small knives are crossed at the bottom with a year of issue included.

On the reverse of the American Western Skulls Indian Brave Silver Round is the fried eagle, a dark take on the heraldic eagle of the US. It features the triangular cluster of 13 stars above the eagle’s head, the national shield on its chest, and the olive branch with arrows of war in the talons. However, this eagle is nothing but a skeletal figure itself.

If you have any questions about these silver rounds, please contact JM Bullion. You can reach out to us on the phone at 800-276-6508, chat with us live online, or email us directly.

Christopher from PA - May 15, 2018
"This round is fantastic. I love the design, and all 4 of the Western Skull rounds so far. Also, I like the fact that it comes in a capsule with COA...which it should for the price. Can't wait for the last 2 of the series."