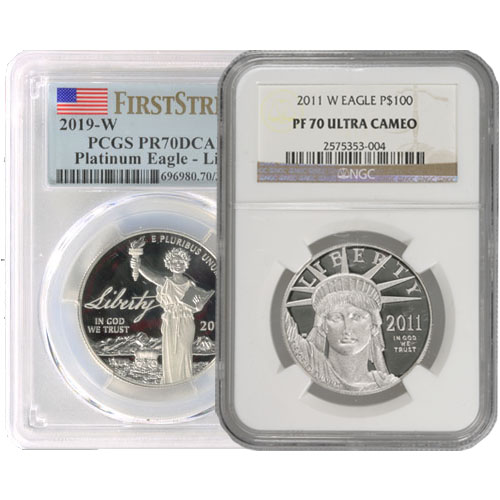 The 1 oz Proof American Platinum Eagle Coin is the only one in the series that has been issued every year since 1997. The fractional-ounce coins once issued in bullion and proof were suspended for good after the 2008 release. That same year, the 1 oz bullion version of the coin was suspended until 2014 and halted again in 2015 before returning permanently in 2016.

On the obverse of 1 oz Proof Platinum Eagles in this listing, you will most likely find the image of the Statue of Liberty created by John Mercanti in 1997. While it still features on the obverse of all bullion versions of the coin, the introduction of the Preamble to the Declaration design series in 2018 brought modern visions of Liberty to the obverse.

The reverse side of 1 oz Proof American Platinum Eagle Coins features more variety in the designs. Most of the coins capture the American bald eagle in some design element form, while others capture symbols of the American government like Lady Justice.

These 1 oz Proof Platinum American Eagle Coins are available to you in perfect condition. PF70 coins have full, original mint luster with no detracting flaws of any kind present. In this listing, the PF70 could come from the PCGS or NGC. Also, you may find additional labels such as Early Release or even First Day of Issue. The former indicates coins received for grading within 30 days of release, while the latter points to coins received for grading within 24 hours of release.

In this random year listing, date marks range from 1997 to the present. We cannot guarantee the date mark and corresponding design you receive. All coins are chosen at random. If you buy multiples, please be aware that you could receive several with the same date mark and design.

We encourage JM Bullion customers to call us with questions at 800-276-6508. You can also contact us on the web using our live chat and email features.