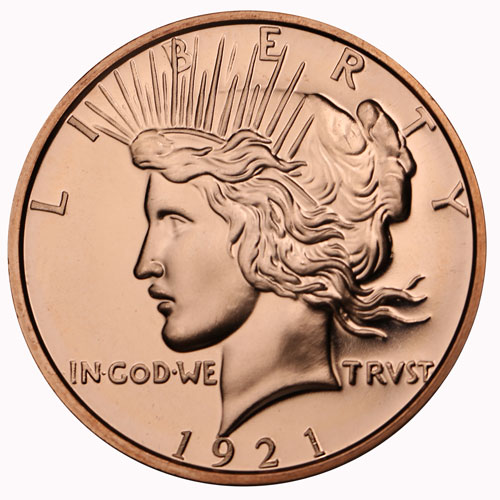 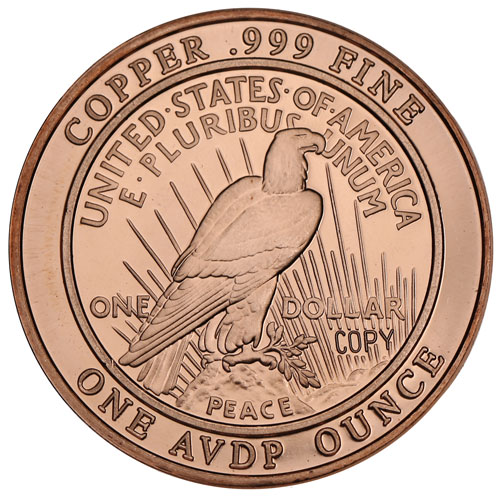 Note: These Peace Dollar rounds are shipped in their originally sealed 20-count tubes if ordering in larger quantities

One of the most popular coin designs from American history is also one of the most short-lived designs. The Peace Dollar had the difficult task of following the popular Morgan Silver Dollar design. All-new depictions of Liberty and the American bald eagle debuted on this original coin, and are recaptured perfectly on the 1 oz Peace Dollar Copper Round, available right now on JM Bullion.

The Peace Dollar coin from the United States Mint was introduced in late 1921 as a replacement for the Morgan Silver Dollar. While the latter was the primary design on American dollar coins from 1878 to 1904, its reintroduction in 1921 was short-lived.

In an effort to adopt a new silver dollar coin design that year, the US Mint sought out a design that better represented the nations post-World War I desire for peace. The design from Anthony de Francisci showed Liberty in a left-profile portrait with softer facial features and a larger crown. The reverse showed the American bald eagle at rest, perched atop a hill with only an olive branch in its clutches.

On the obverse face of this 1 oz Peace Dollar Copper Round youll find Franciscis Liberty design, including the engravings Liberty above, In God We Trvst, with a V instead as a nod to coppers AVDP weight, and the introductory striking year of the original Peace Dollar, 1921.

The reverse bears the Peace Dollar reverse design, with the suns rays shining light on the engravings United States of America, E Pluribus Unum, and One Dollar. Around the outer edge are engravings that identify the coins metal content, purity, and weight.

Each of these 1 oz Peace Dollar Copper Rounds are produced at a private mint facility in the United States of America.