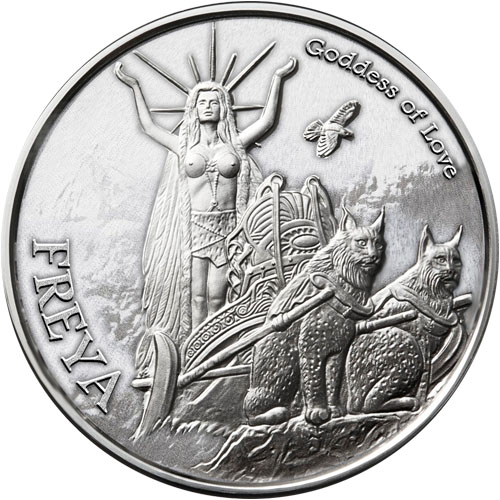 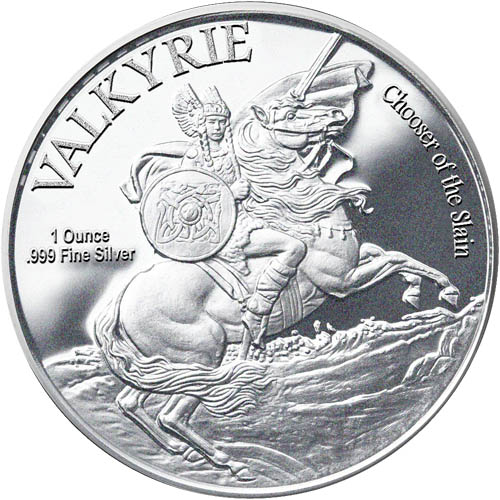 Freya is one of two female goddesses to feature in the five-release Norse God Series from the Anonymous Mint. A complex figure, Freya is officially the Goddess of Love, but is a woman of power as well as the deity who presides over gold, war, and death. Most notably, she is the leader of the Valkryie, the female warriors chosen by Odin to be the Choosers of the Slain. Right now, 1 oz Norse God Series Freya Silver Rounds are available to purchase online from JM Bullion.

Each of the 1 oz Norse God Series Freya Silver Rounds available to purchase here from JM Bullion comes in Brilliant Uncirculated condition. The rounds are individually packaged in plastic flips.

The release of BU Norse God Series silver rounds marks the fourth option in the continuing series of beautiful, Norse-themed images. Prior releases included 1 oz proof silver rounds, 1 oz antique silver rounds, and 5 oz antique silver rounds. Freya was the fourth of the deities to feature in the original collections and is the second goddess after Hel, the Goddess of Death. Each one of the individual deities rules over a different realm and holds distinctive powers. Odin, for example, is the All-Father God and rules Asgard where most of the Norse gods reside. Hel, conversely, rules the lowest of places in Norse mythology: Helheim.

The obverse field of the 1 oz Norse God Series Freya Silver Rounds includes a depiction of Freya on her chariot driven by two cats. Freya is a symbol of love and a beautiful figure as she is the goddess of love, beauty, sexuality, and fertility. However, she is also a powerful figure as she has been known to involve herself in wars and death.

Though Freya is often depicted riding a chariot driven by cats, she is also said to ride a battle swine named Hildisvini into war. As the leader of the Valkyrie, she has a role in choosing who lives and dies in battle.

On the reverse side of Norse God Series Freya Silver Rounds is an image of a Valkyrie rider. These warrior maidens rode the skies on powerful steeds as the armies of mankind fight it out on Earth below. The Valkyrie are responsible for choosing who lives and who dies, as well as sweeping up the valiantly fallen to take them to Valhalla.

If you have any questions, JM Bullion customer service is available to assist you. Our team is available at 800-276-6508, online using our live chat, and through our email address.