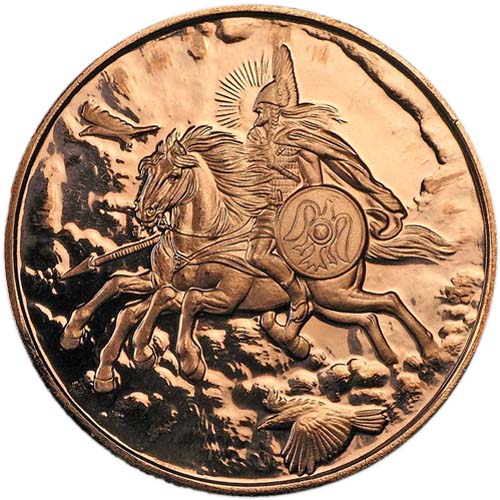 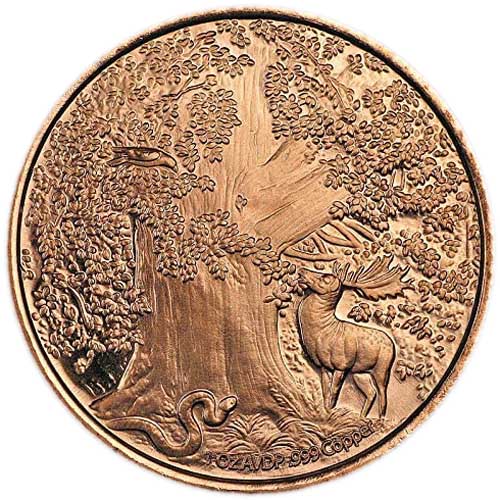 With the release of the all-new Nordic Creatures Series from the Anonymous Mint, some of the beasts that helped and opposed the gods of Norse mythology are being highlighted on silver and copper rounds. In the new copper release, buyers have another chance at the popular designs in this collection. Now, 1 oz Nordic Creatures Odin’s Steed Sleipner Copper Rounds are available to purchase online from JM Bullion.

Odin is the most important deity in the pantheon of Norse mythology. Known as the father god, Odin is the oldest and wisest of the gods, and the most powerful. There are many legends and stories surrounding Odin, but perhaps none is as famous as that of his eight-legged horse.

Sleipner is said to be the most prized horse among both men and gods. With his eight legs, Sleipner was fast enough to ride across any terrain with ease, from the land and sea to the sky itself. After Odin claimed him as his war horse, he rode Sleipner throughout the skies of the nine Norse worlds.

Odin is seen riding atop his powerful steed on the obverse of 1 oz Nordic Creatures Odin’s Steed Sleipner Copper Rounds. The design shows Odin riding confidently on his powerful, eight-legged steed as he wields his spear, a weapon known in Norse mythology as Gungnir. Flying by Odin and Sleipner’s side are the ravens Hugin and Munin. It is most likely that Odin is off to witness a battle and play the ultimate role in who wins and loses in that contest.

The World Tree is featured in the reverse design of Nordic Creatures Odin’s Steed Sleipner Copper Rounds. In this design, the calm beauty of The World Tree is depicted as its countless branches reach up to the heavens. Norse mythology says that the roots of The World Tree cover the three major realms of the world: Hel/Niflheim, Jotunheim, and the human realm.

These 1 oz Nordic Creatures Odin’s Steed Sleipner Copper Rounds are available to purchase in brand-new condition. Individual rounds come with plastic flips, while multiples of 20 come in plastic tubes and multiples of 500 come in boxes. The box holds a maximum of 25 tubes of 20 rounds each.

JM Bullion customer service is available to you at 800-276-6508. Additionally, you can chat with us live online or simply send us an email.