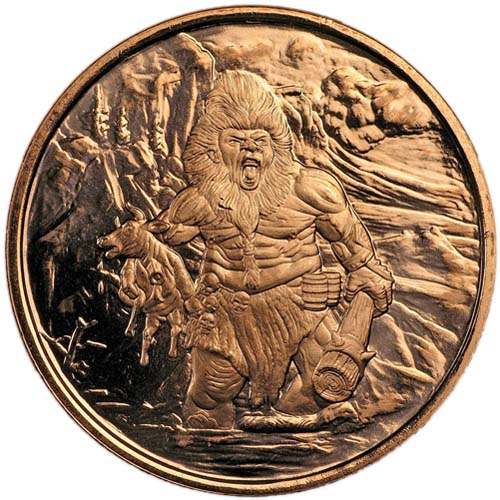 The Anonymous Mint has yet another fascinating new collection of bullion rounds available to collectors, and once again, it is taking inspiration from Norse Mythology. The five-round series known as the Nordic Creatures Series offers the images of five beasts that many Western readers are likely not familiar with. Today, 1 oz Nordic Creatures Frost Giant Copper Rounds are available to you online from JM Bullion.

The Nordic Creatures Series from the Anonymous Mint started out as a series of silver bullion rounds with five distinct designs. After the success of the silver series, the mint now offers those same five designs on 1 oz copper rounds as well. Included in this series, you will find the images of the Dragon Nidhogger, the Frost Giant, Odins Steed Sleipnir, Garm the Hellhound, and the Great Eagle.

All of the 1 oz Nordic Creatures Frost Giant Copper Rounds in this product listing come to you in brand-new condition from the mint. Individual specimens will ship in protective plastic flips. Multiples are available in tubes of 20 rounds or boxes of 500 rounds. The box contains a total of 25 tubes of 20 rounds each.

On the obverse of Nordic Creatures Frost Giant Copper Rounds is a depiction of the mythical Frost Giant. A primitive species of creatures in Norse mythology, Frost Giants are said to live beneath The World Tree in a place known as Jotunheim, a word that translates as the land of the giants. The image of the giant featured here shows the marauder moving through the countryside with his prizes in hand. He has managed to steal a cow and several kegs of beer to help satisfy his large appetite and unending thirst.

The reverse side of 1 oz Nordic Creatures Frost Giant Copper Rounds comes with an image of The World Tree. This is said to be the place where the gods of Norse mythology would meet. Its roots spread throughout the world, with several of the mythical creatures captured in this collection living in realms beneath the roots of the tree. For example, the Frost Giants realm of Jotunheim is beneath one of the three main roots of the tree.

Please contact JM Bullion if you have any questions about these copper rounds. Our team is available to assist you at 800-276-6508, online using our live chat, and via our email address.