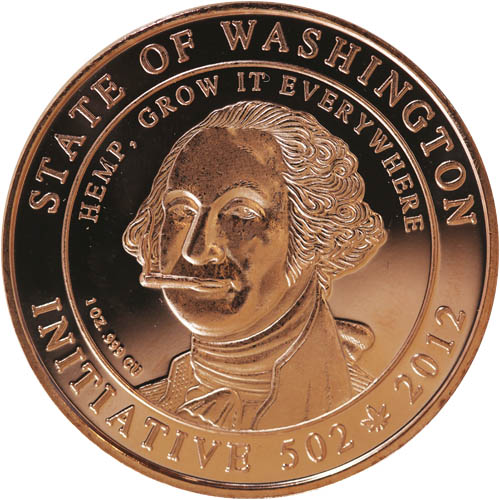 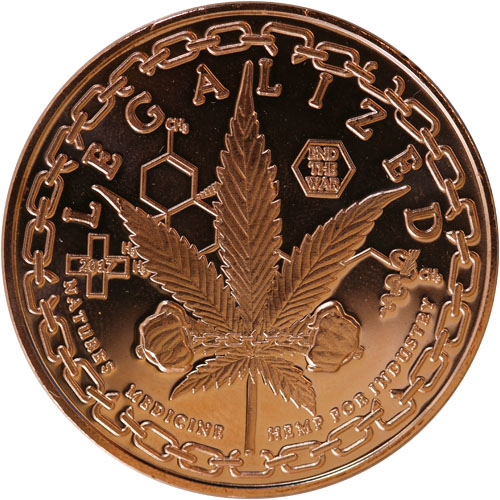 The state of Washington was one of the early adopters in the legalization movement. Starting in 2012, states across the country have moved to make the recreational use of cannabis legal for residents. The move is being celebrated in the Legalized Collection of silver and copper rounds. Now, 1 oz Legalized Collection Washington Copper Rounds are available to you for purchase online from JM Bullion.

That initiative appeared on the ballot during the 2012 US General Election in the state of Washington. Voters approved the measure by a margin of 56% in favor to 44% against the move. With cannabis now legal for recreational use, the state joined Colorado as the first two to both legalize cannabis for this purpose and to allow for recreational cannabis sales.

On the obverse of 1 oz Legalized Collection Washington Copper Rounds is a fun twist on the state seal for Washington. The state seal is a simple one that boasts a portrait of the state’s namesake, 1st President of the United States, George Washington. In this particular design, Washington’s portrait has been altered to include a marijuana joint between his lips.

The reverse field of Legalized Collection Washington Copper Rounds comes with an image that is commonly used across the Legalized Collection. The design shows a handcuffed cannabis leaf, a nod to the federal government’s continuing insistence that cannabis remains illegal for recreational purposes.

These 1 oz Legalized Collection Washington Copper Rounds are available in brand-new condition. The third version of Legalized Collection Rounds produced, these copper rounds come inside of plastic flips, plastic tubes of 20 rounds, or boxes of 500 rounds. Each box holds a total of 25 tubes.

JM Bullion customer service is available to assist you at 800-276-6508. We are also available to answer your questions online through our live chat and email address features.