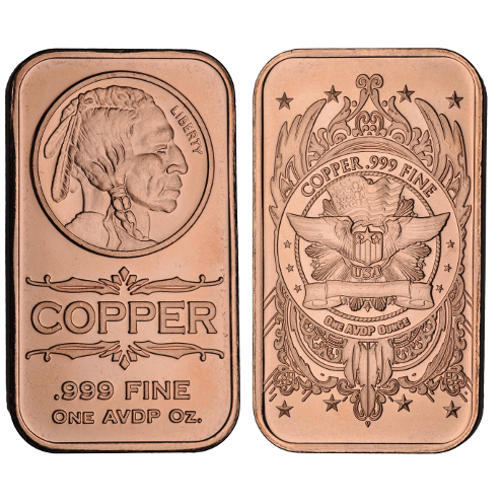 The early 20th century saw the onset of a massive effort by the United States Mint and federal government to redesign all of its circulation currency. At this point in the nation’s history, most of the designs featured on American currency were created in 1895, or earlier. In the interest of modernizing designs and giving coins a sense of American flair, the government turned to popular artists and sculptors for help. James Earle Fraser was one of those individuals, and his famous Indian Head nickel design is honored on the 1 oz Indian Head Copper Bar, available now from JM Bullion.

The administration of President William H. Taft continued the work started by President Theodore Roosevelt in redesigning all of America’s circulation currency. The United States Mint and Treasury selected James Earle Fraser to reinvent the imagery used on the nation’s five-cent piece.

Fraser was a native of Winona, Minnesota, and grew up on the prairies of the American Midwest during the late 19th century. He used the images he saw firsthand as inspiration for the design of his nickel, which became known as the Indian Head nickel. On one side of his original design, there was the image of a Native American Chieftain in right-profile relief. The other side featured an American bison.

The Indian Head Nickel design was finalized in 1913 and put into circulation by the US Mint that year, remaining in circulation through 1938. Fraser’s Native American chieftain design represents the compilation of three different real-world Native American leaders alive at the time. His bison creation was inspired by Black Diamond, a resident bison at New York City’s Central Park Zoo in the early 20th century.

Contact JM Bullion at 800-276-6508 with any questions you have about this one ounce Indian Head Copper Bar or any of our other products. We can also be contacted through email, chat and our online forms. We are constantly adding new products so be sure to check back frequently. We look forward to helping you add to your copper collection.

Steven from - March 11, 2022
"Beautiful and ornate design on a lustrous background."

Edward from NJ - July 14, 2017
"When the copper bars arrived and I opened them my daughter thought they were jewelry.I am impressed by the sharpness of detail and luster on each of them.Cool looking pieces."

Nathanial from MO - March 21, 2016
"I picked up a few of these when I purchased my gold and silver. My kids think they are great, and I like how inexpensive copper is right now! Great looking bars."

Ross from VA - November 08, 2014
"I bought one of these for my son and he loves it!! Awesome product and service. Thanks again!"