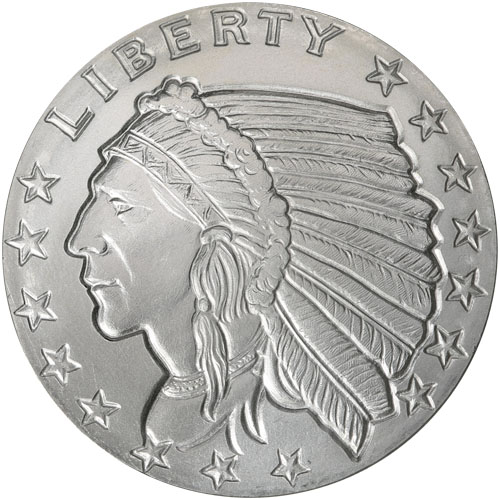 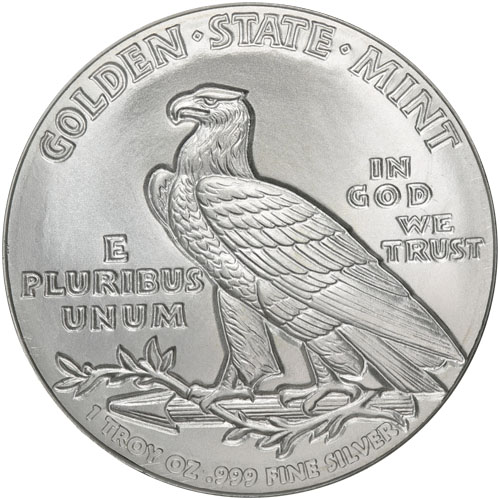 As low as $6.24 per oz over spot!
Add to WishlistLog In to add this product to your Wishlist
Free Shipping on $199+ Orders

Based upon the iconic design found on the Half Eagle and Quarter Eagle gold coins from the United States Mint in the early 20th century, the 1 oz GSM Incuse Indian Silver Round from the Golden State Mint (GSM) brings one of the nation’s most unique designs to an affordable silver round series. Right now, 1 oz GSM Incuse Indian Silver Rounds are available to purchase online from JM Bullion.

Each of the 1 oz GSM Incuse Indian Silver Rounds in this product listing is based upon one of the more unique American coin designs ever issued. These silver rounds are available to purchase online inside of individual protective plastic flips or in multiples that include tubes of 20 rounds.

The Incuse Indian Silver Round borrows its design inspiration from the Quarter Eagle ($2.50) and Half Eagle ($5.00) gold coins issued by the United States Mint during the first two decades of the 1900s. The former coin was available from 1908 to 1929 at the US Mint, while the latter was issued during that same time period with the exception of a four-year hiatus during World War I.

Designed by Bela Lyon Pratt, the Incuse Indian Head was a departure from the other Gold Eagle coins of the era which used an Indian Head design that was, in reality, Lady Liberty with the feathered headdress of a Native American chieftain. Pratt’s design depicted the figure of an actual Native American rather than a twist on Liberty’s appearance.

On the obverse side of the 1 oz Incuse Indian Silver Round is the image of a tribal elder in left-profile relief. There are 15 stars surrounding the figure with the word “Liberty” engraved above his head.

The reverse face of the 1 oz GSM Incuse Indian Silver Rounds features the depiction of an American bald eagle. The eagle sits with wings at its side as it clutches a quiver of arrows wrapped in an olive branch. The bird is accompanied by engravings of “Golden State Mint,” “E Pluribus Unum,” “In God We Trust,” and the round’s weight, purity, and metal content.

If you have any questions, please contact JM Bullion with those inquiries. You can call us at 800-276-6508, chat with us live online, or simply send us an email with your inquiries.