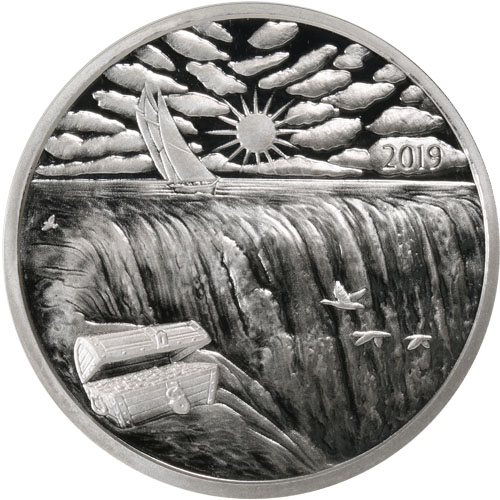 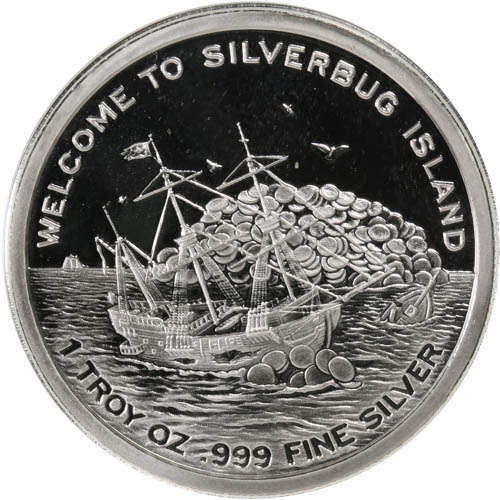 From the Ancient Egyptians to the 17th century Chinese empires, civilizations around the globe believed at some point in time that Earth was flat. Each civilization’s belief of a flat Earth varied, but in most cases it was believed that the landmasses of Earth were merely floating on the waters of the ocean with the edge of the ocean similar to a disc. Reach the end of the disc and you will fall off into an abyss.

In the obverse design, the 1 oz Proof Ends of the Earth Silverbug Island Silver Round features a sailboat moving parallel to a waterfall that symbolizes the edge of the planet. Though the sun is out and the waters are calm, these sailors are moments from death if they stray too close to the edge of the world. The group might be in pursuit of the treasure chest floating near the water’s edge, but to catch up to it will likely result in death.

For the reverse, all rounds in the 1 oz Ends of the Earth Silverbug Island Silver Round collection have a common element. Here you will find the image of Silverbug Island as it emerges from the sea. Made up entirely of silver coins, it has already lured more than one ship full of sailors to doom.

These 1 oz Proof Ends of the Earth Silverbug Island Silver Rounds are available with traditional proof visuals that include frosted designs and mirrored fields. The rounds are packaged individually inside of plastic capsules.

JM Bullion customer service is available to help answer questions about 1 oz silver at 800-276-6508. You can contact us online as well through our chat service and email address features.