1 oz Don’t Tread On Me Silver Shield Round (New) 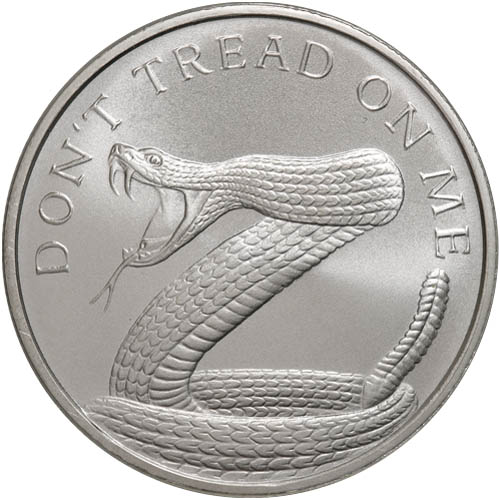 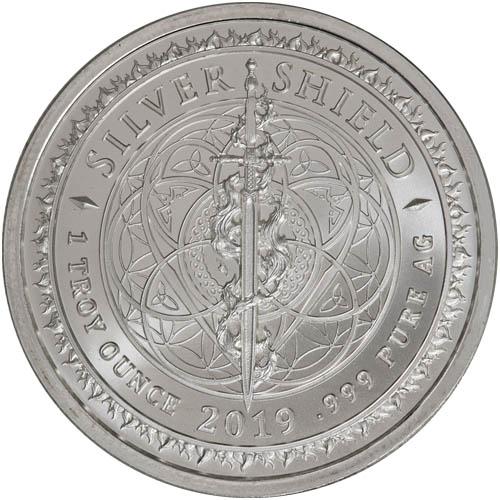 PLEASE NOTE THAT ROUNDS ARE PICKED BASED ON OUR CURRENT INVENTORY AT THE TIME OF PLACING YOUR ORDER. WE CANNOT GUARANTEE WHICH YEAR YOU WILL RECEIVE.

One of the most common phrases among Americans during the Revolutionary War was the battle cry “Don’t Tread on Me.” Rarely uttered in battle, the phrase was more of a cry used to drum up popular support within the American Colonies for the cause of independence. The 1 oz Don’t Tread On Me Silver Shield Round is currently available to you for purchase online from JM Bullion.

American colonials had had enough of British taxation by the mid-1770s. Many of the people living in the colonies at this time came from England in the first place, but they bristled at the lower status they held in the eyes of the British and the fact that taxes were levied on Americans without their input allowed in the process.

This was among the primary reasons behind the American independence cause. The phrase “Don’t Tread On Me” gained popularity among Americans during the Revolutionary War as a sign of their dislike for British oversight of America. The phrase was often depicted along with a coiled rattlesnake, an image reflecting a reluctance to strike but that all knew was a sign the rattlesnake could strike. The two designs popularly appeared during this era on the Gadsden Flag.

On the obverse of 1 oz Don’t Tread On Me Silver Shield Rounds is the famed design with a modern twist. This rattlesnake is menacing and powerful in appearance with the phrase “Don’t Tread On Me” engraved above its figure as opposed to below, as on the Gadsden Flag. The Gadsden Flag was the creation of American general and politician Christopher Gadsden. Designed in 1775, it was the first motto flag of the Continental Marines.

The reverse of 1 oz Don’t Tread On Me Silver Shield Rounds includes the common design of all Silver Shield Collection releases. Here, you’ll find the image of a sword with ornate decorations around it and markings of the series name, weight, purity, metal content, and date mark of the round.

All of these individual 1 oz Don’t Tread On Me Silver Shield Rounds in this listing is available to you in Brilliant Uncirculated condition. The rounds are shipped individually or as multiples, with single rounds issued in protective flips and multiples housed inside of rounds from the Golden State Mint.

We encourage JM Bullion customers to call us at 800-276-6508 with questions about silver for sale. You can also connect with us online through our live chat and email address.

Lawrence from - December 22, 2020
"" As in all my reviews any comments on the item(s) purchased should not have nor is meant to have a negative out look on JM Bouillon. " First JM Bullion scores five star again the service (Thank You, Brian) is just outstanding. Received four rounds today and all I can say is WOW ! All four rounds are outstanding but for two very small pit marks on one round I'll go and say flawless. The design on the reverse is beyond words, The detail is just amazing, I waited a long time for these rounds to come back in stock and it was well worth the wait."

Mark A from - April 24, 2020
"I am very happy with my purchase here. Fast shipment, package secured along with the nice keeper for the rounds! I'm a new "investor"! Decided I was going to "buy" into .999 silver. I don't have any faith in the "fiat" currency."