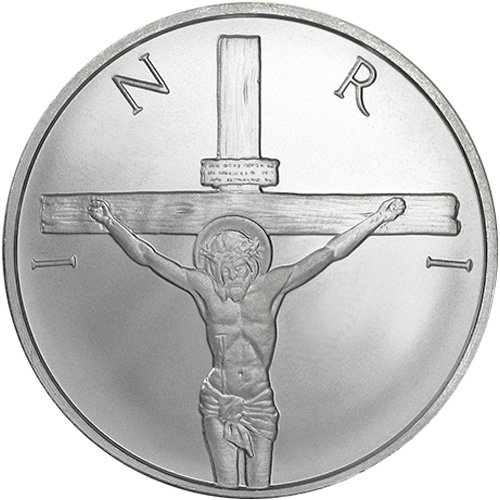 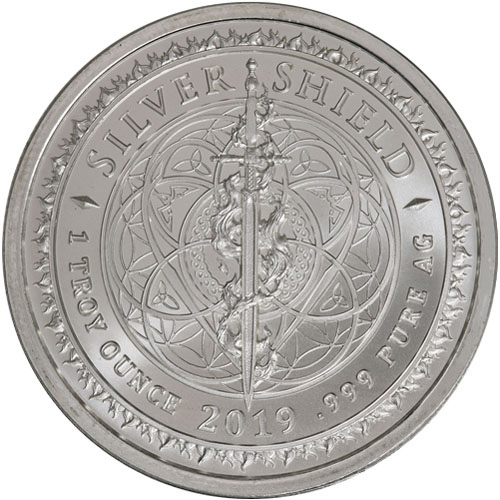 PLEASE NOTE THAT ROUNDS ARE PICKED BASED ON OUR CURRENT INVENTORY AT THE TIME OF PLACING YOUR ORDER. WE CANNOT GUARANTEE WHICH YEAR YOU WILL RECEIVE.

Crucifixion was a form of punishment used throughout the ancient world to torture and kill dissidents, traitors, and enemies. It was also a powerful symbol to those who would resist a power that the fate they would meet was gruesome. There is no crucifixion known to more people around the world than that of Jesus Christ. The 1 oz Crucifixion Silver Shield Round is available to you online today for purchase from JM Bullion.

In 1st-century Judea, Jesus Christ was arrested, tried, and crucified for speaking out against the rabbis of the Jewish temple and the ruling Roman authorities. He spoke of a new path to knowing God, and from his beliefs and teachings, a new branch of Christianity would eventually arise. Before this could happen though, he had to be put to death to cleanse mankind of their sins.

The crucifixion of Jesus Christ is portrayed on many Christian symbols today, most notably the crosses that hang in Christian, Catholic, and Lutheran churches around the globe. The symbol reminds followers of the ultimate sacrifice made by Jesus on their behalf to help them find a way to a better life and possibility of an afterlife in heaven with God.

On the obverse of the 1 oz Crucifixion Silver Shield Round is the image of Christ as his body languishes on the cross. Nailed through each hand and together through his feet, his body was left to hang on the cross until he could no longer support himself and would eventually suffocate as his lungs were unable to take in air.

Engravings on this face are simple and include the letters INRI. These letters are believed to have been on the cross of Jesus and in Latin says Iesus Nazarenus, Rex Iudaeorum. Translated into English, the initials mean Jesus of Nazareth, King of the Jews (or Judeans).

The reverse of the Crucifixion Silver Shield Round features the common design element used on all silver rounds in the collection. A sword is positioned on its point with an ornate design surrounding it, flames on the outer edge, and engravings identifying the series, weight, purity, and metal content of the round.

We encourage JM Bullion customers to call us at 800-276-6508 with questions. You can also reach out to us online through our live chat service and email address with your inquiries.