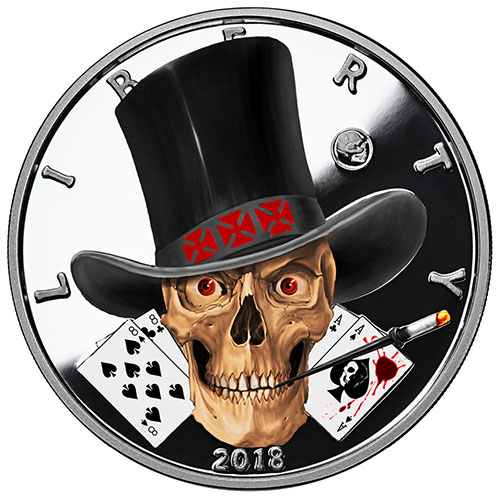 As the American frontier opened up and people began to leave the relative comfort of the East Coast in the 19th century, those individuals who made the decision to head West in search of a different life were taking a big risk. There was no guarantee of fortune, a comfortable life, or even a long life at that. These folks were, by nature, gamblers. This makes the new Gambler Silver Round in the American Western Skulls Collection the perfect addition to the series. The 1 oz Proof Colorized American Western Skulls Gambler Silver Round is currently available to you for purchase online from JM Bullion.

Many of the individuals who decided to move from the established towns and cities of the East Coast to open up the American West were taking a big risk. Disease, lawlessness, and conflict with the indigenous tribes already living in the West meant that death was waiting around every corner.

It should come as no surprise then that gambling was a popular recreational activity in bars and saloons in the west. They already risked their life moving to the frontier, whats a few bucks in a game of cards? The American Western Skulls Collection now has a unique figure in the form of the Gambler Silver Round.

On the obverse of Proof Colorized American Western Skulls Gambler Silver Rounds is the image of one unfortunate gambler who didnt win his bet. The Gambler is wide-eyed as he holds the Dead mans hand of aces and eights in poker. He wears a large, black top hat and smokes a thin cigarette. The hand he holds has two black aces and two black eights.

The reverse of the 1 oz Proof Colorized American Western Skulls Gambler Silver Round includes the image of the fried eagle. This deadly twist on the heraldic eagle design replaces the American bald eagle with a fried bird that has no feathers left.

These 1 oz Proof Colorized American Western Skulls Gambler Silver Rounds are housed inside of individual protective capsules and come with a numbered Certificate of Authenticity. The numbered COA includes the same serial number found on the edge of the rounds. The proof colorized versions of American Western Skulls rounds have layers of colorized lacquer on the obverse designs.

We encourage JM Bullion customers to contact us with questions when buying silver by calling us at 800-276-6508. You can also connect with us live online through our chat service or simply send us an email.

David from PA - November 09, 2018
"Every weekend my grandsons ask if there are any new ones out. They love these rounds. Thanks for giving us something to remember together."