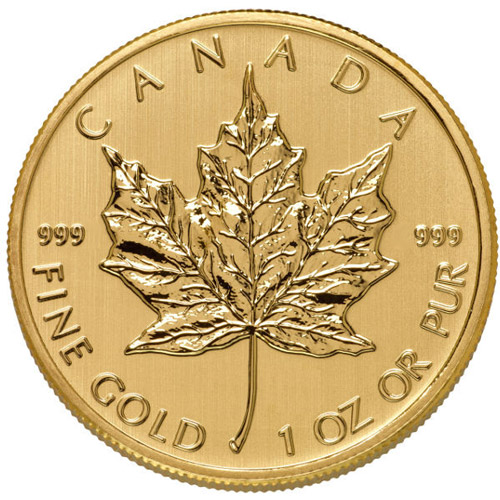 The Canadian Gold Maple Leaf is one of the most important coins struck in the modern history of coinage. The Royal Canadian Mint introduced these coins for the first time in an era when the Krugerrand from South Africa was losing its sway because of political strife. Today, it is among the most popular coins in the world. In this special JM Bullion listing, you can purchase varied 1 oz Canadian Gold Maple Leaf coins with .999 purity.

The Royal Canadian Mint released the Canadian Gold Maple Leaf coin as a sovereign bullion product for the first time in 1979. The coin’s release coincided with a Western boycott of goods from South Africa due to that nation’s system of apartheid. The South African Krugerrand, then the most popular gold bullion coin in the world, had its first major competitor in the form of the Gold Maple Leaf.

On the obverse side of every Canadian Gold Maple Leaf coin is the image of Queen Elizabeth II of England. Her Majesty’s effigy on the obverse of these particular coins reflects the Queen at the age of 39 years old. This depiction of the Queen was in use from 1979 until 1989, when it was replaced by an age-appropriate portrait.

The reverse of every Gold Maple Leaf coin bears the image of a sugar maple leaf, the official emblem of the nation of Canada. Engravings on this side of the coin include the word “Canada” across the top, the purity on both sides of the leaf design, and the coin’s metal content and weight below.

The dates available for purchase in this product listing today cannot be guaranteed. You will receive a Canadian Gold Maple Leaf in uncirculated condition, and featuring a year of issue between 1979 and 1982.

Please direct your questions to a JM Bullion associate at 800-276-6508, or connect with us online using our live web chat and email services. To view similar products, check out our Canadian Gold Maple Leaf Coins.