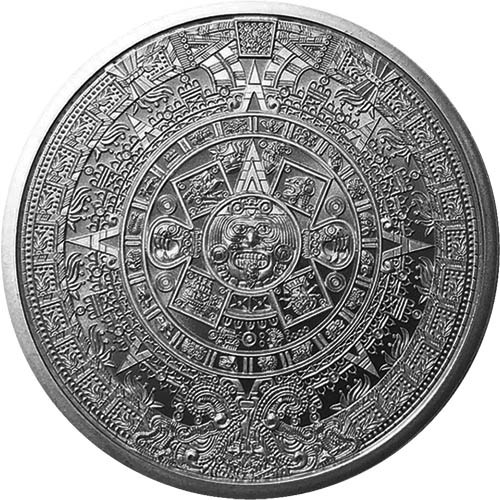 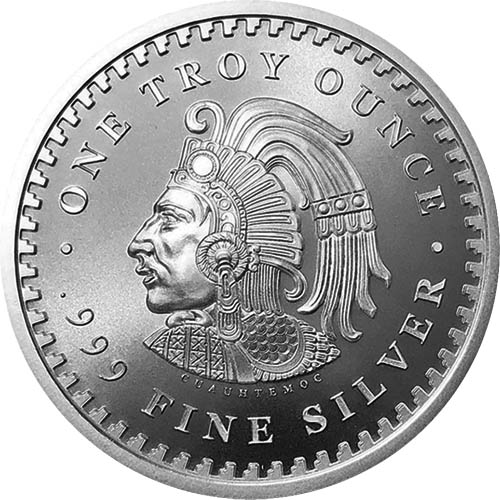 Housed in the National Anthropology Museum in Mexico City, one of the most coveted pieces of Central American culture is the Aztec sun stone. Discovered in December 1790, the stone was carved around the year 1500 and references the origins of the cosmos and the organization of the universe as the Aztecs understood the world. Today, 1 oz Aztec Calendar Silver Rounds are available to you online from JM Bullion.

Also known as the Aztec calendar stone, the Aztec sun stone is a critical piece of historic Aztec construction. The stone itself weighs more than 24 tons and is 12 feet across and more than 3 feet thick. The stone was buried in the center of ancient Mexico City following the Spanish conquest of Mexico and the Aztec Empire, and later rediscovered in 1790 during repairs to the Mexico City Cathedral.

All 1 oz Aztec Calendar Silver Rounds in this listing are available to you in either individual or bulk packaging. Individual rounds come to you inside of protective plastic flips while bulk options are available in tubes of 20 rounds or boxes of 500 rounds.

On the obverse side of these 1 oz Aztec Calendar Silver Rounds is a replication of the designs found on the actual Aztec sun stone. The designs are arranged in a circle resembling the sun and includes the face of the Aztec solar deity, Tonatiuh, in the center. He is featured with a human heart in each hand and is surrounded by a ring of 20 symbols that represent the days of the month on the Aztec calendar.

The reverse of the 1 oz Aztec Calendar Silver Round bears a left-profile bust of Cuauhtemoc. He was the last emperor of the Aztec Empire and reigned for just one year. When he came to power, the Aztec Empire’s capital city of Tenochtitlan had already been destabilized by the invasions of Spanish conquistadors throughout the empire. Following the death of Moctezuma II and his brother, the successor, Cuauhtemoc was elected leader by the noblemen. He is featured in this design wearing the headdress and earring typical of Aztec nobility.

Please feel free to reach out to JM Bullion with questions about these silver rounds. You can reach us on the phone at 800-276-6508, chat with us live online, or email us directly.

Gilbert from FL - March 08, 2022
"Fantastic piece, waiting for more to come back in stock to order more. Artwork on the back is super detailed. A must have for your collection! "

James from - June 21, 2020
"GSM hit it out of the park with this; it truly does the subject matter justice. May cause some owners to dream of acquiring the 5oz version!"

Andres from - December 03, 2019
"Beautiful round!!! Shipping was fast will be doing business again soon."