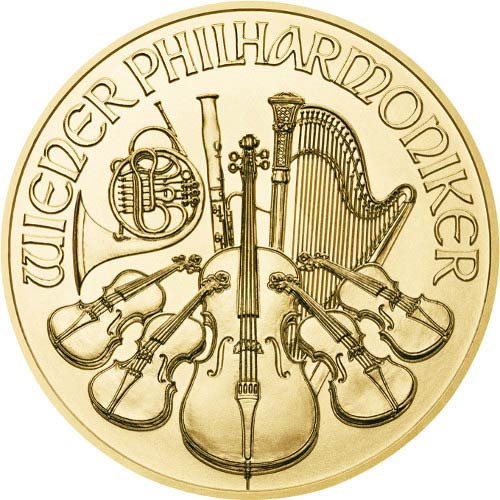 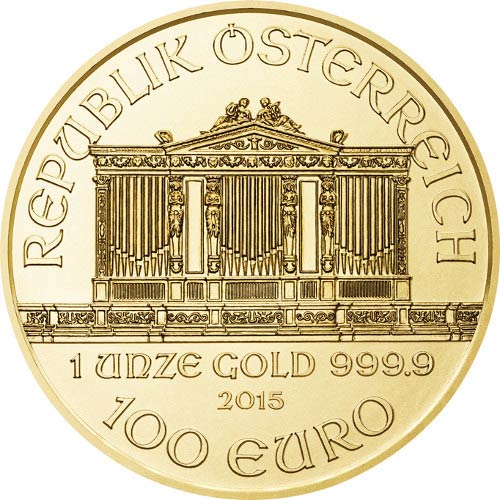 As low as $77.09 per coin over spot!
Add to WishlistLog In to add this product to your Wishlist
Free Shipping on $199+ Orders

The launch of the Eurozone’s common economy and currency, the Euro, changed the face value of the coins starting in 2002. The face value of 2,000 (ATS) shifted to the common currency, with all coins struck since 2002 bearing a 100 (Euro) face value. Although the coins have a Euro face value, they are only considered legal tender in Austria.

On the obverse side of all 1 oz Austrian Gold Philharmonic Coins you’ll find the image of the Musikverein Pipe Organ found inside of the Golden Music Hall. Located in the Innere Stadt neighborhood of Vienna, the national capital of Austria, the hall is the home performance center of the Vienna Philharmonic Orchestra.

The reverse of the Gold Philharmonic includes a cornucopia of musical instruments used by members of the Vienna Philharmonic Orchestra. Included in this design are a Vienna horn, bassoon, harp, four violins, and a cello, which serves as the central focal point of the design. Both designs in the coin series come from Thomas Pesendorfer, the chief engraver of the Austrian Mint.

In this product listing you have the chance to purchase 1 oz Austrian Gold Philharmonic coins, each containing .9999 pure gold. These products come from a random year of issue, with mintage dates ranging from 1989 when the coins were introduced to 2016.

The Austrian Mint is the official sovereign mint of the government of Austria, and is one of the few in Europe authorized to produce Euros for the common currency zone of the European Union.

If you have questions, please feel free to contact JM Bullion. Our customer service associates are available at 800-276-6508, online using our live web chat, and via our email address.

Maxwell from NY - August 08, 2017
"I recently just purchased 4 of these beautiful gold coins. I decided to go with the random year option. I got 2003 and a 2005 which is nice because the domination is in Euros. The other coins were 1999 and 1996 and those were in schillings. All in all I am very pleased, coins arrived just as described BU condition. Package and shipping was great. Thanks JM Bullion!"