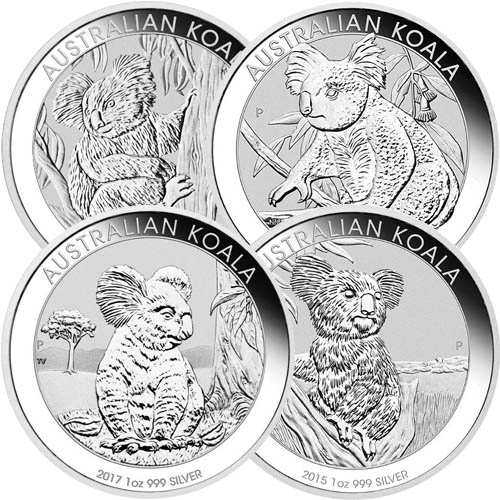 Changes have come to the Australian Silver Koala in more forms than just the constantly rotating images of the koala on the reverse. From 2007 to 2017, the coins featured .999 pure silver content. In 2018, the Perth Mint increased the purity content of its major silver bullion coins to .9999 pure silver. Additionally, Queen Elizabeth II’s effigy has changed once in the series history as well.

The obverse of 1 oz Australian Silver Koala coins includes a right-profile portrait of Queen Elizabeth II. Coins dated 2007 to 2018 have the Ian Rank-Broadley design introduced in 1998 on British coins and 1999 on Australian and other Commonwealth coins. Since 2019, the series has used Jody Clark’s sixth-generation Australian portrait of Her Majesty.

On the reverse of Australian Silver Koala coins, there is a new design each year. The koala is one of the many marsupial species native to the Australian continent. Designs in the history of this program generally include just one koala in different poses and reliefs. The 2008 coin is notable for the use of a mother koala with its young baby on its back.

These 1 oz Australian Silver Koala Coins are available to you in protective plastic flips or capsules. This is a random year listing, so we cannot guarantee the date mark and corresponding design you receive. If you purchase more than one, please keep in mind that you could receive several coins with the same date mark and designs.

We encourage JM Bullion customers to call us at 800-276-6508 with questions. You can also reach out to us online through our live chat and email address features.