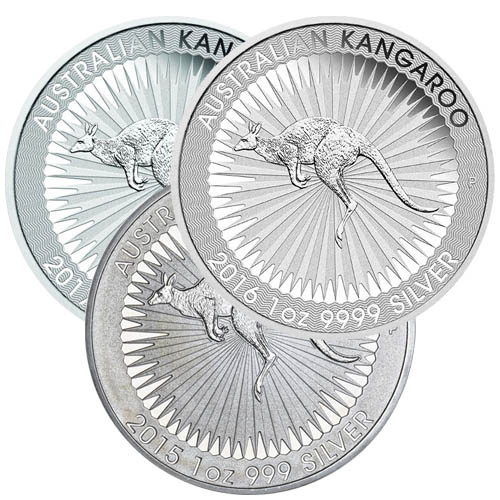 Any quantity available for $6.89 per oz over spot!
Add to WishlistLog In to add this product to your Wishlist
Free Shipping on $199+ Orders

Australia’s Perth Mint has a history of introducing silver bullion coins that go on to earn wide acclaim and generate intense demand among numismatists. Following in the footsteps of the Kookaburra and Koala coins, the Perth Mint released the Australian Silver Kangaroo bullion coin for the first time as a 2016-issue coin. You now have the chance to purchase one of these 1 oz Australian Silver Kangaroo Coins with random year of issue and condition online from JM Bullion.

Kangaroos are one of the most beloved creatures from the Australian continent, and are well known around the world as a symbol of the nation. With its distinctive movement and massive, powerful tail, the kangaroo is a unique creature. It is also the largest marsupial in the world today.

The obverse of each coin bears the hallmarks of all Perth Mint coins. Queen Elizabeth II’s right-profile portrait is surrounded by inscriptions of her name, the nation of issue, and the coin’s face value.

On the reverse is the image of the Australian kangaroo, complete with a new security feature in the letter “A” for the engraving of “Australia.” When viewed under magnification, a smaller letter A is visible.

For these silver coins, the Perth Mint rolled out increased security features on the reverse side of the design. The new authentication features includes the aforementioned micro-laser engraved letter “A” inside of the first “A” in the engraving of “Australia.” It is only visible under magnification and is designed to combat counterfeiting.

All 1 oz Australian Silver Kangaroo Coins in this condition come from random years of issue, either 2016 or 2017, in the new Silver Kangaroo issue. The condition of the coins will vary, and both the condition and year of issue will be determined by availability in our warehouse when your order is prepared for shipping. Any Silver Kangaroo coins issued prior to 2016 feature .999 fine silver content and bear varying designs.

Australia’s Perth Mint is a state-owned entity of the government of Western Australia, and is not associated with the Royal Australian Mint.

We encourage all JM Bullion customers to contact us with questions. You can call us at 800-276-6508, chat with us live online, or email us directly.

WESLEY from - November 11, 2019
"Very pleased with the condition of the coins I received! Indistinguishable from BU in my opinion."

Michael from MN - April 20, 2018
"For those of you wondering if this is a .999 or .9999 coin, I got (6) 2017 Perth Mint coins with .9999. Sounds like a deal to me. Not a true fully government backed coin, like a Canadian Mint. It is a State backed coin and has more value to me than a mine mint. Pricing is between the two and seems fair. Like all JM Bullion shipments, fast and well packed. Others may have fancier boxes, but price / quality / service has made JM Bullion my go to choice for the long term."