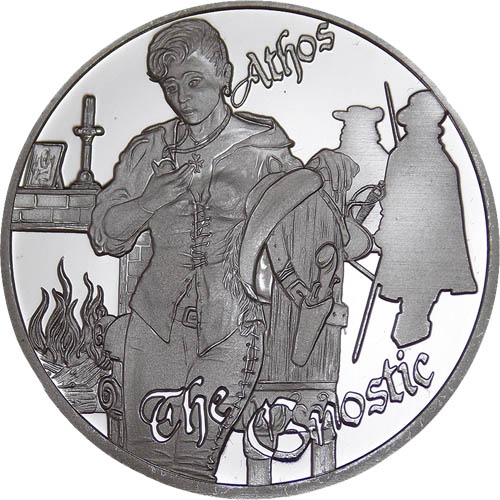 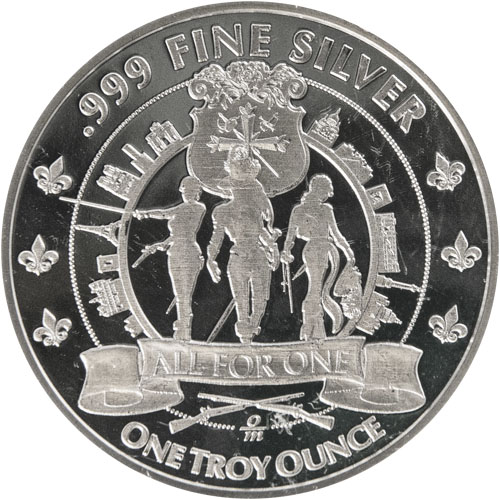 As low as $15.99 per round over spot!
Add to WishlistLog In to add this product to your Wishlist
Free Shipping on $199+ Orders

In the mid-19th century, Alexandre Dumas wrote a series of fictional novels that would captivate not only the French public, but readers around the globe. His work is loosely based on actual Musketeers in the service of the French king during the 17th century. Each of the figures was among the greatest of the Kings guard, but the story was told through the eyes of D’Artagnan, a young man looking to join the vaunted Musketeers.

Among the figures, Athos is the only character to have a mysterious past as it relates to Dumas primary villain, Milady de Winter. Athos is the oldest of the Three Musketeers and though he is noble and handsome, he is also said to be a taciturn character who seeks to drown his melancholy attitude in drinks.

On the obverse of Athos Silver Rounds in the Three Musketeers Series, you will find a depiction of Athos. Here, she seems to be standing in a tavern near a fireplace gazing at a trinket around her neck. In the background, the other musketeers appear as silhouettes within the design element.

The reverse side of the 1 oz Athos Silver Round features a common depiction used throughout the series. Here, we see the silhouettes of all Three Musketeers walking toward the viewer with a Parisian city skyline around the central field and a crest above.

These 1 oz Athos Silver Rounds in the Three Musketeers Series are available to you individually in capsules. Multiples come with plastic tubes of 20 rounds or boxes of 500 rounds.

JM Bullion customer service is available to assist you at 800-276-6508. Additionally, you can chat with us live online or email us directly.