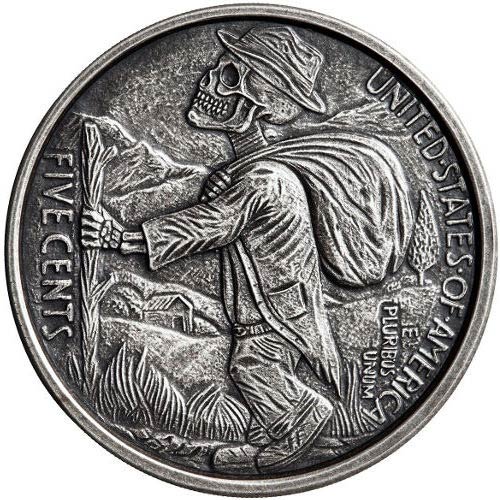 Fans of the new Hobo Nickel Silver Round Series havent had to wait long for the release of each new design from Mr. The. Originally released in February 2016, the second and third silver rounds have already been released by June 2016. Right now, the 1 oz Antique Skulls and Scrolls Hobo Nickel Silver Round is available as the third release in the series, and available from JM Bullion.

From the first release in the series, numismatists were clamoring for the designs of Mr. The. His new-age take on hobo art brought back a long-lost artform to the world of coin designs. Throughout the 18th, 19th, and early 20th centuries, Americas hobos left their mark across the nation in many ways, including unique carvings on circulation coins.

Mr. The brings this back to life with his exciting renditions of the famed Buffalo Nickel from James Earle Fraser. In this third release of the series, he introduces skeletal forms to the designs used on the nickel. Additionally, each round has unique edge lettering that includes engravings of a serial number (up to 1,000), weight, metal content, and purity for the round.

On the obverse of the 1 oz Antique Skulls and Scrolls Hobo Nickel Silver Round youll find the right-profile portrait of Frasers Indian altered to feature only the skeletal figure of the head.

The reverse of the round includes the walking hobo from the second release, but with a different twist. His skull is visible instead of bearing common human features, and a boney hand reaches out for the walking stick he uses in his travels.

Each of the 1 oz Antique Skulls and Scrolls Hobo Nickel Silver Round in this listing has an antique finish, adding warmth and depth to the design and giving it the appearance of an original five-cent piece from the early 20th century.