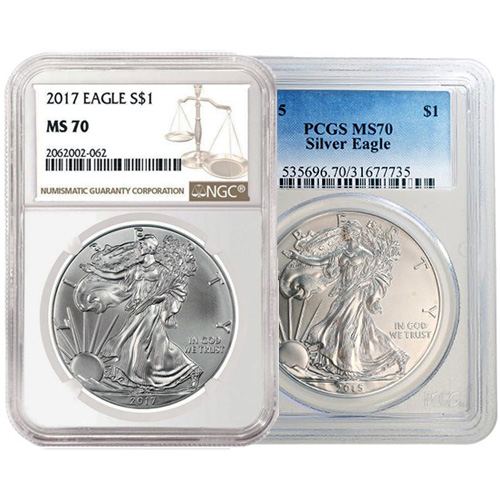 Any quantity available for $29.91 per coin over spot!
Add to WishlistLog In to add this product to your Wishlist
Free Shipping on $199+ Orders

The American Silver Eagle is one of the most sought-after annual-issue bullion coins in the world. Though its mintage is often very high in the 21st century, surpassing 20 million coins in a given year on numerous occasions, the American Eagle is in high demand because of its government-backed purity and content. Right now, 1 oz American Silver Eagle Coins are available to purchase online from JM Bullion.

In this JM Bullion listing you can purchase a 1 oz American Silver Eagle Coin certified in perfect condition by the PCGS or NGC. Coins with a Mint State 70 certification exhibit full, original mint luster and feature no detracting flaws of any kind.

This unique listing gives you the chance at a random American Silver Eagle coin. JM Bullion guarantees the coin you receive will be certified Mint State 70. This certification comes from either the PCGS or NGC, as do the included labels. Examples of such include First Strike or Early Release, indicating the coins arrived for certification within the first 30 days of their respective release date by the US Mint.

We cannot guarantee the year of issue for your coin, which grading house label you’ll receive, or which additional label (FS or ER) might be included. Your 1 oz American Silver Eagle will be chosen at random from our available stock when the warehouse crew packs your order for shipping.

The obverse of all American Silver Eagle Coins features the iconic Walking Liberty design. Created in 1916 by Adolph A. Weinman, it appeared on the nation’s half-dollar coin from 1916 to 1947 and replaced the Liberty Head design on the Barber Coinage that had been in use in the US since 1892.

On the reverse of the 1 oz American Silver Eagle Coin is a modern version of the heraldic eagle. Originally featured in 1794 on the first American coins struck at the Philadelphia Mint, this particular design was refined in 1986 by John Mercanti, who would go on to serve as the 12th Chief Engraver of the United States Mint from 2006 to 2010.

If you have any questions, please don’t hesitate to contact JM Bullion. Our customer service team is available at 800-276-6508, online using our live chat feature, and via our email address.