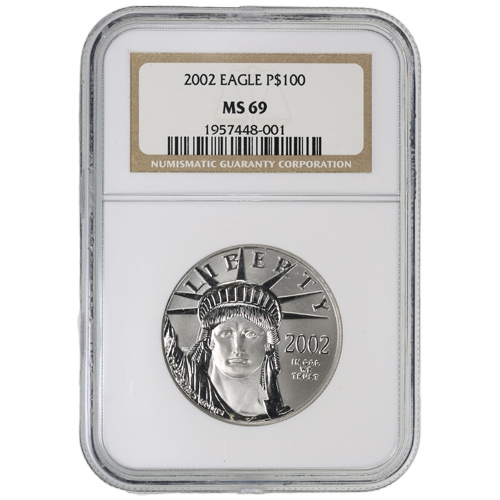 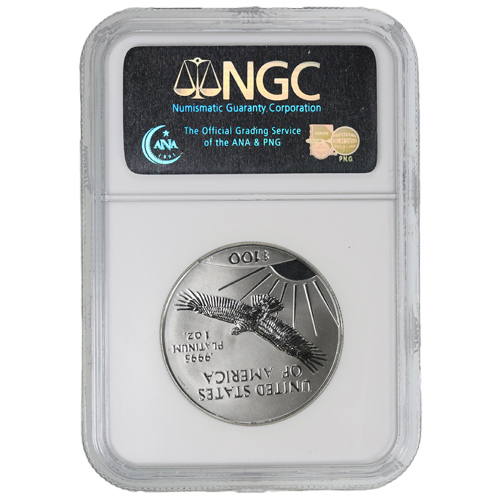 American Platinum Eagle coins debuted in 1997 with proof and bullion version available. The 1 oz coin has been the most consistent in production throughout the coins history, with the bullion coin struck from 1997 to 2008, and suspended until 2014 as a result of the Great Recession and surging demand for the American Silver Eagle.

While the proof 1 oz coin continued during the recession, the bullion was suspended entirely. As such, the 1 oz American Platinum Eagle Coin you receive from this product listing will have a year-of-issue date from either 1997 to 2008, or 2014 to 2016. The highest reported mintage year for the 1 oz American Platinum Eagle, to date, remains 1998 when 133,002 coins were produced.

All 1 oz American Platinum Eagle coins in this listing are in near-perfect condition. Coins in this condition exhibit full, original mint luster and a maximum of two minor detracting flaws. These flaws are limited to minuscule hairlines and contact marks, and found only outside of the primary focal areas of the coin.

On the reverse of the 1 oz American Platinum Eagle coin is Thomas D. Rogers Eagle Soaring Above America design. This was used on the 1997 proof coin, as well as all bullion versions of the coin to date. That makes this design the only one to ever appear on both the bullion and proof reverse faces in the same year.

Please dont hesitate to reach out to JM Bullion. Our customer service department is available on the phone at 800-276-6508, on the web using our live chat service, and via our email address.