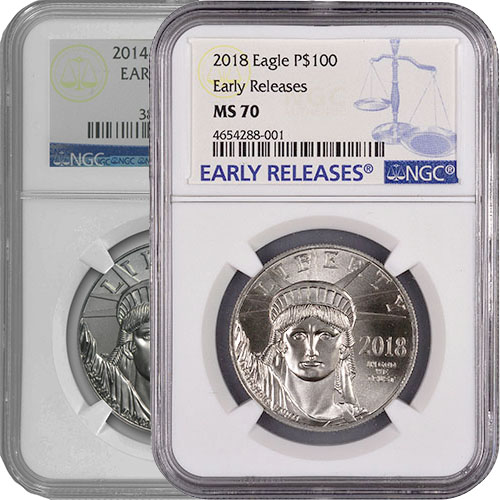 The American Platinum Eagle bullion coin debuted in 1997 with 1 oz, 1/2 oz, 1/4 oz, and 1/10 oz coins available to investors. This remained the case for the series until 2008 when the US Mint suspended the program for a number of years. When the Platinum Eagles returned in 2014, only the 1 oz platinum coin was offered. It was not struck in 2015, but has been issued in each year since 2016.

The highest mintage figure in the series remains the 133,002 coins issued in 1998. The popularity of the American Platinum eagle waned throughout the 2000s, with the five mintage years before the suspension of the program boasting mintage figures that barely surpassed 8,000 in any given year.

On the obverse of 1 oz American Platinum Eagle coins is the image of the Statue of Liberty. In this design from John Mercanti, you’ll see the image focuses on the face of Liberty as she stands on Liberty Island in New York Harbor.

The reverse side of American Platinum Eagle coins features a design from Thomas D. Rogers. This image depicts an American bald eagle gliding in its flight over the continent. Its wings stretched to the widest point, behind the bird you’ll see the sun coming up over the horizon.

In this JM Bullion listing, 1 oz American Platinum Eagle coins are available to purchase in perfect condition from the NGC. Coins with a Mint State 70 certification have full, original mint luster with no detracting flaws of any kind. This is a random year listing, so we cannot guarantee the date mark you’ll receive. If you purchase more than one coin here, please note that you may receive several coins of the same date mark.

We encourage JM Bullion customers to contact us at 800-276-6508 with questions. You can also reach out to us online using our live chat and email address features.