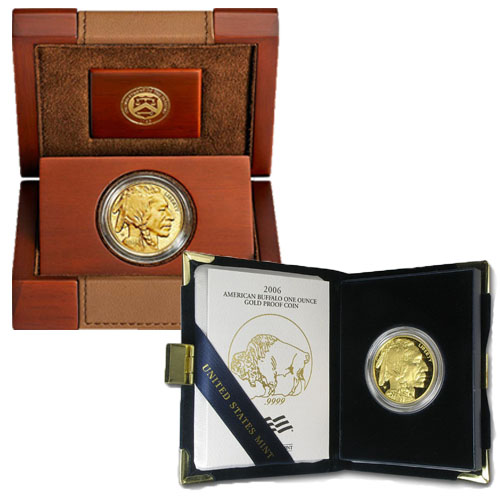 PLEASE NOTE – these are random year coins based on our inventory, and may come in the alternate box.

The United States Mint was founded in 1792 by the Coinage Act of 1792 and began issuing the first US gold coins in 1794. For the next 210 years, the United States Mint would not issue a gold coin with greater purity than 22-karat gold. In 2006, the American Gold Buffalo Coin changed all of that with a ground-breaking coin. The 1 oz Proof American Gold Buffalo Coin is currently available to you for purchase online from JM Bullion.

American Gold Buffalo coins contain 1 Troy oz of .9999, or 24-karat, pure gold. When the Gold Buffalo was introduced in 2006 it became the purest gold coin ever issued by the United States Mint. The Proof American Gold Buffalo, like its bullion counterpart, is traditionally only available in the 1 oz weight.

The 2008 release of the Proof American Gold Buffalo Coin included a total of four weights with 1/2 oz, 1/4 oz, and 1/10 oz coins joining the 1 oz option. This was the only year in which these weights were available though. The highest mintage in the history of the Proof Gold Buffalo came in the debut 2006 issue with 246,267 coins struck. The lowest mintage figure to date was 16,591 coins in 2015.

On the obverse of all Proof American Gold Buffalo Coins is the image of a Native American tribal figure. This right-profile portrait was created in 1913 by James Earle Fraser for use on the Buffalo Nickel and was designed with the influence of facial features from three real-life native leaders of the early 20th century.

The reverse of 1 oz Proof American Gold Buffalo Coins features the image of an American bison. A critical animal to the culture of tribes from the American Plains, the buffalo is the largest land mammal in North America. This design is based upon Black Diamond, a resident bison at the Central Park Zoo in New York City in the early 20th century.

In this JM Bullion listing, you can purchase 1 oz Proof American Gold Buffalo Coins from a random lot. Our warehouse teams selects your coins once your payment is processed and we cannot guarantee the date mark on the coin you receive. If you purchase more than one coin, please be aware that you could receive multiples of the same date mark.

We encourage JM Bullion customers to call us at 800-276-6508 with questions. You can also connect with us online through our live chat and email address features.

Earl from - August 29, 2020
"Great service, quick delivery, I liked the call back instead of waiting to order and the proof Buffalo I bought was beautiful. I bought the boxed proof and the whole package was very nice "

John from CA - May 16, 2020
"Got these 3 proof Buffalo in the mail today. I was hoping for all wooden boxes, yet after doing more research on them I see one I got was a 2007 was a rare year, then I got a 2011 and a 2016. They are ALL very nice coins! I am a very satisfied customer specially since I got the last 3 you had, As I have found these coins are very hard to find now a days. "