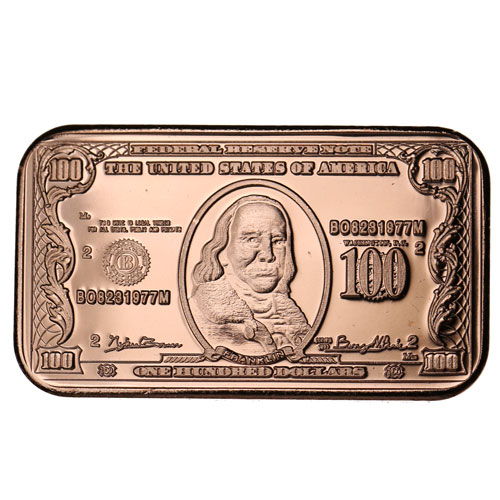 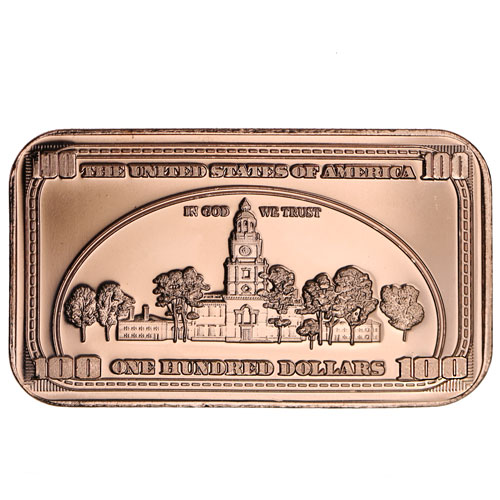 The modern $100 bill from the United States Mint is known affectionately as a “Benjamin,” thanks to the portrait of one of the nation’s influential Founding Fathers, Benjamin Franklin. Given his role in the nation’s founding, Franklin’s image was a natural choice for American currency and is captured perfectly on the 1 oz $100 Banknote Copper Bar, which is available right now from JM Bullion.

Each of the copper bars available for purchase through this JM Bullion listing is privately minted here in the United States of America. The bars you are viewing and receive with purchase arrive in brand-new condition courtesy of JM Bullion.

Benjamin Franklin was one of the most influential thinkers from early American history. He not only played a vital role in the United States leading the cause for rebellion and freedom, he also served overseas during the Revolutionary War as a representative of the fledgling nation in Paris, helping to secure vital support from the French.

Franklin was chosen as the man whose face would grace the $100 bill when it was first printed by the US Mint in July 1969. It was the largest denomination printed by the Mint at that time, and has featured a profile of Franklin ever since. In addition to his geopolitical efforts for the nation, Franklin went on to serve as the country’s first Postmaster General for the United States.

The reverse face of the bar features the image of Independence Hall in Philadelphia, Pennsylvania. The site of so many important moments in American history, the hall is best known as the place where American diplomats crafted not only the Declaration of Independence, but the Constitution of the United States of America.

If you have any questions, JM Bullion encourages you to reach out to one of our associates. You can contact us on the phone at 800-276-6508, connect with us online using our hosted web chat, or even submit your questions to us in writing using our email address.

Alfred from - August 31, 2022
"Great piece the writing and the numbers are so clear well worth the money "