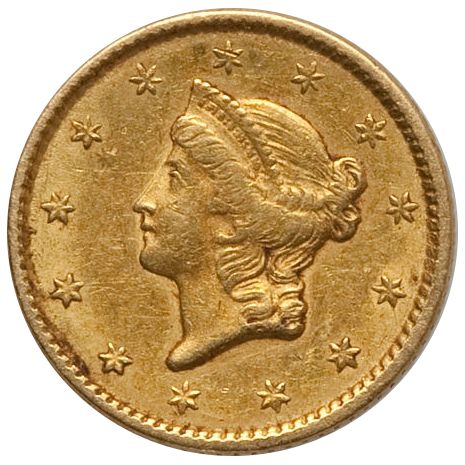 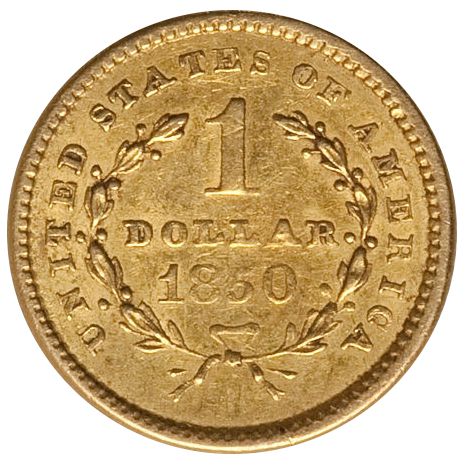 Pre-1933 $1 Liberty Gold Coins in the Type 1 category were struck between 1849 and 1854. These were the first coins struck following the discovery of gold in California. With a massive influx of gold coming into US Mint reserves during this period, millions of gold coins were struck.

On the reverse side of each coin is the image of Lady Liberty. Designed by James B. Longacre, the coins depict Liberty’s head in a left-profile portrait. Her image is encircled by 13 stars, representing America’s original colonies that rebelled against British rule.

The obverse side of the coin features all of the coin’s identifying features. In the middle is the coin’s face value ($1 USD) and its year of minting. Those engravings are surrounded by a wreath, tied with a ribbon at the bottom. Along the top of the coin is the inscription “United States of America.”

Each coin in this product listing is guaranteed to feature a year of minting from the Type 1 time period. The Extremely Fine grade assigned to these coins speaks to the condition of its features. XF coins show very little wear, with most of the major features still clearly defined and much of the coin’s luster still evident.

The United States Mint struck $1 Liberty Gold Coins at five of its mint facilities. The Philadelphia Mint was the primary facility, with the now-defunct Charlotte, Dahlonega, and New Orleans Mints contributing to production at times.

We encourage all JM Bullion customers to ask questions when they arise. Direct your inquiries to JM Bullion associates at 800-276-6508, online through our live web chat, or via email. Check out our entire selection of Pre-1933 Gold Coins if you are interested in similar products.