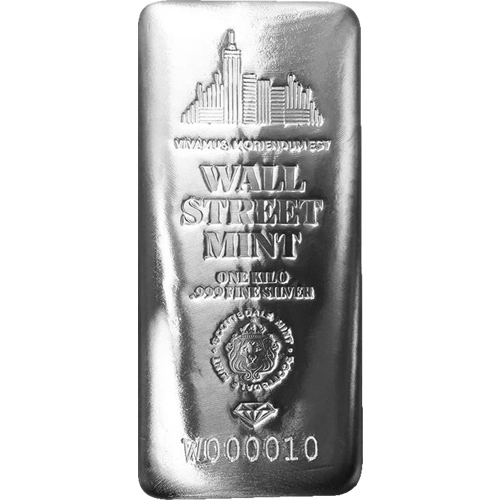 When the Dutch settled the city as New Amsterdam in the 17th century, the same part of town was known as “de Waalstraat.” This area of town has a long history as a trading marketplace and securities trading location. It was also the original site of Federal Hall, the first city hall for New York.

Another element included in the design of these Wall Street Mint Silver Bars is the inclusion of the Latin phrase “Vivamus Moriendum Est.” This phrase is credited to the Roman philosopher Seneca and it translates to English as “let us live, since we must die.” This phrase has often been interpreted in modern society as a twist on the concept that life is short, so live it up.

Reverse features of 1 Kilo Wall Street Mint Silver Bars include a blank field. Cast silver bars such as these typically have a flat reverse surface that may show minor striations, lines, and other textures that result from the cooling and settling of the silver during production.

These 1 Kilo Wall Street Mint Silver Bars are available to you with stamped design elements on both sides. Individual bars are packaged with protective shipping materials in a standard shipping box, while a cardboard box is available for multiples of 20.

Zachary from VT - June 25, 2021
"gorgeous bar! better than the picture. may buy another . highly recommended"