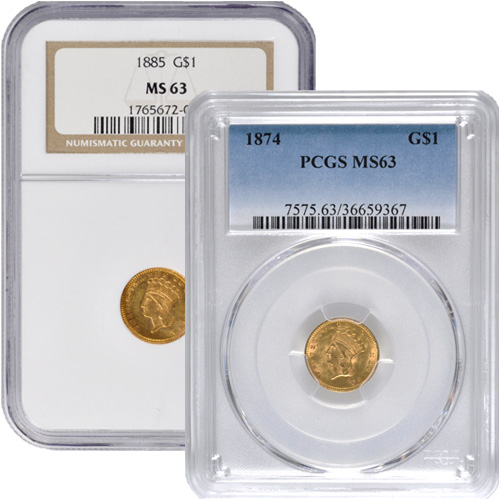 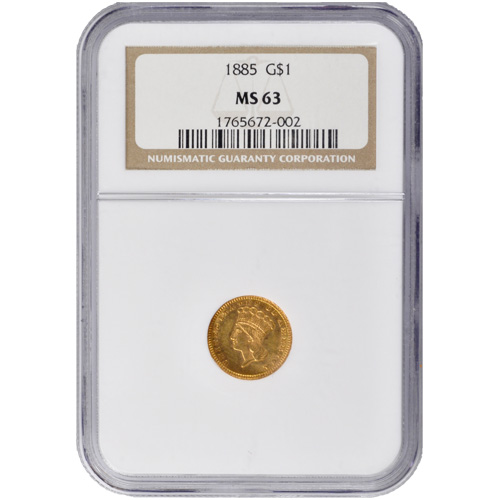 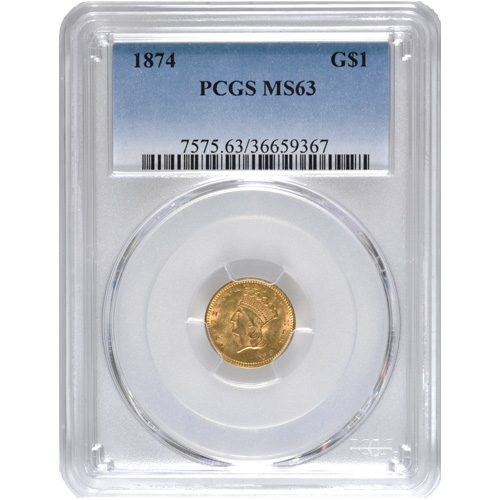 Please note: these coins are either PCGS or NGC graded as MS63 condition and will be from years of our choice, all 1856-1889.

The Type III $1 Indian Head Gold Coin was produced by the United States Mint from 1856- 1889. Although it was the last coin in the $1 gold coin series, it would be one of the most historically significant. This Type III coin was among the few remaining $1 gold coins to enjoy circulation before the Act of September 26, 1890 stopped lower denomination gold coins from being produced.

Each of the Type III Indian Head Coins from this collection has been NGC (Numismatic Guaranty Corporation) or PCGS (Professional Coin Grading Service) certified as an MS63 (Mint State 63) grade with a total gold content of .048375 troy ounces. Coins evaluated with this grade are in acceptable condition despite visibly noticeable contact and hairline marks. Great care has been taken to keep each coin individually sealed in its proper NGC or PCGS plastic case.

The final design changes in the $1 Indian Gold Coin reflect the clearer sense of identity that was emerging within the nation during this time. The most obvious change, which was to the front of the coin, is the departure from the inscribed crown adorning Lady Liberty’s hair in favor of a feathered war bonnet. The integration of this tribal headdress into her appearance paralleled with America’s new willingness to acknowledge the indigenous aspects of its own culture.

Similarly, the front design also shifts away from the border of thirteen stars, as a reference to the original colonies, to the nation’s name which recognizes all of its states. Lastly, the wreath alterations on the back of the coin now feature the iconic crops of distinct regions rather than the agricultural community as a whole. The definitive design of this coin illustrates our nation’s newfound appreciation of its varying cultural and industrial components.

With such a rich and vivid history, this Type III $1 Indian Head Gold Coin has become a cherished favorite among coin enthusiasts. To ensure that our customers don’t miss out on this unique piece, we recommend ordering these coins while our supplies last.