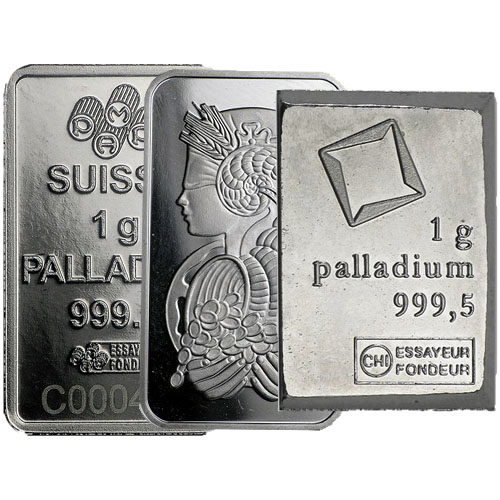 One of the fastest growing bullion products available to precious metal buyers right now is palladium. This silver-white metal is part of the platinum metals group and is as rare as the other members of the PMG. Natural ore deposits of palladium are found in just four places in the world in abundance. The 1 Gram Palladium Bar is currently available to you for purchase online from JM Bullion in varied condition and from varied mints.

Palladium is a rare silver-white precious metal that is part of the platinum metals group. Other metals in the PMG include platinum, rhodium, ruthenium, iridium, and osmium. All of the metals in this group have similar chemical properties, but it is palladium that features the lowest melting point and is the least dense of the metals in the group.

Most of the existing supply of palladium in the world is used along with platinum in the production of catalytic converters. It is the job of these automotive tools to convert as much as 90% of the harmful gases produced by internal combustion engines into less noxious substances. You’ll also find palladium used in other applications ranging from dentistry and medicine to electronics and groundwater treatment systems.

On the obverse and reverse of these 1 Gram Palladium Bars, you’ll find varying designs depending on the mint or refinery of origin. PAMP Suisse, Valcambi Suisse, and Credit Suisse are just a handful of the global refineries that produce investment-grade bars in this precious metal.

PAMP Suisse is known as the world’s leading bullion brand and its popular Fortuna design is commonly struck in palladium. Credit Suisse is Switzerland’s oldest operating refinery and was originally founded to finance the construction of Switzerland’s railway and electric grids. Valcambi Suisse is a younger refinery that has undergone various ownership changes in the 20th century, but remains a prominent brand within the industry.

In this JM Bullion listing, you have the chance to purchase 1 Gram Palladium Bars in varied condition from several different mints. All palladium bars arrive inside of protective packaging. Some bars may be in original condition while others could feature flaws. JM Bullion will select your palladium bar based on availability. We cannot guarantee conditions or mint of issue, and if you buy multiples you may receive several of the same bar and condition.

We encourage JM Bullion customers to reach out to us at 800-276-6508. You can also connect with us online through our live chat and email address.