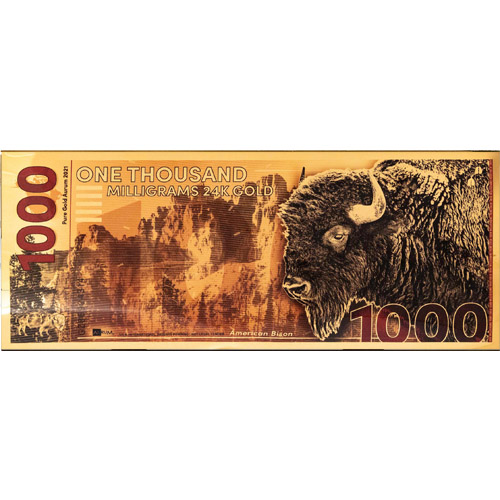 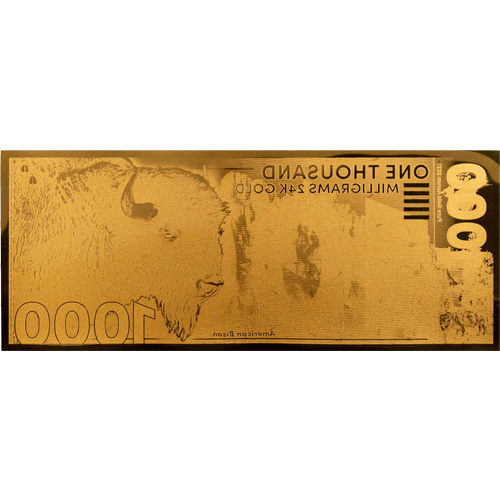 There is no land mammal in North America larger than the North American bison. This species holds a prominent place in the culture of both America and the indigenous tribes that have lived in North America for thousands of years. A powerful, majestic beast, the bison is held in high regard in mythology and religion, and was also an important source of food and tools to indigenous tribes. Right now, 1 Gram Aurum Bison Gold Notes are available to purchase online from JM Bullion.

Each 1 Gram Aurum Bison Gold Note available here is made in a unique process that layers thin amounts of 24-karat gold between two layers of durable polymer. This note is then packaged in a protective currency sleeve for shipping to provide added security to the item. Aurum gold notes feature various levels of micro-printing and come with multiple security elements to create beautiful visuals that are also secure.

The new Aurum Bison Gold Note is the first release in a planned series of five animal-themed gold notes. Known as the North American Animal Series, these Aurum gold notes start with the image of the North American Bison. The follow-up releases will feature the American Brown Bear, Mountain Lion, Grey Wolf, and the American bald eagle. The subsequent notes will come in varying sizes, each of which is planned to be smaller than the 1 Gram Aurum Bison, making it the largest release of the series.

A powerful depiction of the North American Bison is found on the 1 Gram Aurum Bison Gold Note. The design of the Bison shows the upper half of the beast in left-profile relief. The bulk of the bison’s frame is captured in great detail with its powerful horns included within the design field. In the background, you will notice the landscape from Yellowstone National Park, one of the few remaining native ranges of wild bison in North America.

The reverse side of 1 Gram Aurum Bison Gold Notes does not have its own imagery. Because these notes are so thin, it is not possible to put designs on the reverse without interfering with the reverse imagery.

If you have questions about gold for sale, JM Bullion is here to help. Please call us at 800-276-6508, chat with us live online, or email us directly.